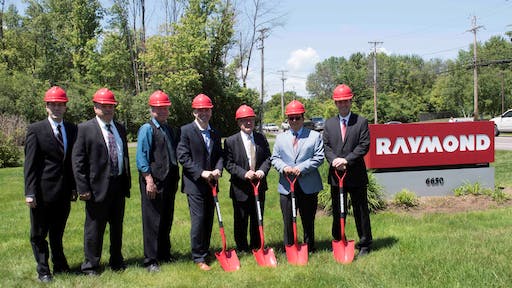 The Raymond Corporation announced last month plans for a center dedicated to the remanufacturing of Raymond forklifts, including the truck body, as well as the truck’s components, including motors, drive units, handles and hoses.

In the center, the remanufactured product line will grow to include additional drive units and steer gear motors, Reach-Fork truck carriage assemblies, and hydraulic pump and motors. New lift chain assemblies will also be cut in the new RayBuilt Center of Excellence.

“The RayBuilt Center of Excellence products are exclusively supported by The Raymond Corporation, utilizing the exact same engineering specifications and Toyota Production System (TPS) principles as all Raymond manufacturing facilities follow,” says Michael Field, CEO at The Raymond Corporation. “The creation of the new RayBuilt Center of Excellence will further support our continued growth, as well as support all our customers’ evolving needs with end-to-end solutions—from forklifts to parts to leasing.”

RayBuilt has been a division of Raymond since 1991. It has been remanufacturing more than 18,000 components every year, including motors, drive units, handles and hoses. To date, the RayBuilt facility has recycled more than 8 million pounds of core material.

Caption: During an open house and ribbon-cutting ceremony for the RayBuilt Center of Excellence on June 9, 2017, Raymond also announced the expansion of its Raymond Parts Division with more than 40,000 square feet being added to its distribution center located on Kirkville Road, East Syracuse, New York.

A San Francisco biotech company that had just three employees when it formed in 2014 is set to go worldwide with a food safety platform as early as 2019.

Clear Labs, which aims “to index the world’s food supply and set worldwide standards for food integrity,” according to its website, has in the past year nearly doubled its staff from 20 to 35. It recently moved to a larger space, where it can accommodate an additional 10 employees and begin working on its platform.

“We started out with the vision of building a platform for the food industry to identify any ingredient type within a food item and really build a safer food supply around the globe,” co-founder Mahni Ghorashi tells The Mercury News.

Primarily developed for the pharmaceutical industry, but also useful for the food industry, the LifeGUARDIAN solution responds to current failings in cold chain distribution.

Incorporating 100 percent pure, clean sheep’s wool that is too coarse for textile use, LifeGUARDIAN is described as an eco-friendly insulating packaging system developed to address packaging failure. The prototype is said to outperform synthetic insulation, like polystyrene, to keep temperature sensitive goods in their optimum environment for up to twice as long as industry standards.

Swanline Print’s expertise in corrugated engineering has transformed a box design provided by Woolcool, a provider of insulated packaging solutions, into a viable pre-industrial prototype that addresses many of the challenging aspects of product construction, such as ease of assembly in bulk manufacturing and logistics management.

The Manitoba-based telecommunications company donated $500,000 to the University of Manitoba’s (UM) Front and Center campaign, to launch the Bell MTS Innovations in Agriculture Program.

The new program seeks to provide UM students with the opportunity to develop IoT applications in agriculture and food services.

“Working on IoT solutions within the agriculture, food, and nutrition sectors not only offers our students a unique skills development opportunity that will support their future career opportunities, it is critical to the advancement of our agriculture and food economy,” said Karin Wittenberg, dean of the faculty of agricultural and food sciences, in a media release.

According to the campaign website, the University of Manitoba launched its Front and Center campaign to help ensure the province’s “long-term economic, social, and cultural viability.” The Front and Centre campaign hopes to raise $500 million.

The $5 billion total capital investment speaks to the opportunities Aldi sees in an oversaturated market, and offers further evidence that a new era of discount retailing is dawning in the United States.

At a time when traditional grocers feel fortunate to add a dozen new stores per year, Aldi plans to add close to 200 stores per year over the next five years. The discounter’s small format and low overhead costs mean it can open quickly in more places than other retailers. It can also potentially reach more customers with its low prices and increasing fresh appeal.

Once its expansion plan is complete, Aldi estimates it will serve 100 million U.S. customers each month.

Key factors driving the growth of this market include emergence of multi-channel distribution networks, growth of the e-commerce industry, increased adoption of on-cloud WMS solutions, and globalization of supply chain networks.

The software segment accounted for the largest share of the WMS market in 2016. However, the sservices segment of this market is anticipated to grow at the highest CAGR between 2017 and 2023. The need for constant upgrade of WMS software to ensure data security and the rising demand for regular maintenance and testing of the software are key factors driving the demand for WMS services.

Key factors restraining the growth of the WMS market are high installation cost of on-premise WMS for small and medium sized companies and reluctance in replacement of legacy systems.Major market players such as SAP SE, Manhattan Associates and Oracle have adopted key growth strategies, such as new product launches, expansions, contracts and collaborations to enhance their product offerings and expand their businesses.