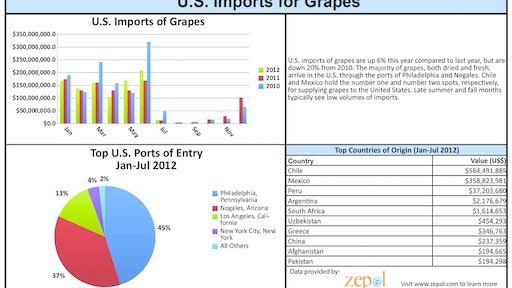 A free trade agreement (FTA) between the United States and Panama is expected to go into effect in early November once Panama puts the finishing touches on the pact.

“The United States and Panama are on the eve of bringing an historic trade agreement into force,” noted Deputy U.S. Trade Representative Miriam Sapiro recently.

The free trade pact, approved by the U.S. Congress nearly a year ago, will immediately eliminate Panama’s tariffs on 86 percent of U.S. consumer and industrial goods, including autos, chemicals, electrical equipment, information technology and medical technology once it comes into force. It also will immediately eliminate Panama’s tariffs on roughly 50 percent of U.S. agriculture exports.

Panama’s remaining agricultural, industrial and consumer product tariffs are phased out over longer periods of time.

ConAgra Foods is the latest food company taking steps to eliminate gestation crates for animals. Recently, the company requested its pork suppliers to submit plans showing how the crates will be eliminated by 2017.

The crates are under increased scrutiny. Animal rights activists say they are inhumane because they are barely bigger than the pigs themselves.

Animals should be allowed to move, mother pigs shouldn’t be crammed into a cage so small she can’t turn around her whole life, remarked Josh Balk of the Humane Society of the United States (HSUS).

The U.S. Department of Agriculture is forecasting record high agricultural exports for fiscal years 2012 and 2013.

Specifically, exports of food and agricultural products are expected to reach $143.5 billion in fiscal 2013, well above the record set in 2011. At the same time, the forecast for fiscal 2012 is revised upward to a near-record $136.5 billion. Since 2009, U.S. agricultural exports have made gains of 50 percent.

Secretary Vilsack added that agriculture is stronger today than at any time in the nation’s history, supporting and creating good American jobs for millions. He also called on Congress to help ensure that this success continues by passing a comprehensive, multi-year farm bill.

Walmart Ahead On Sustainability Goals

Walmart’s sustainability index that evaluates the environmental impacts of its products is rolling out ahead of schedule.

According to Andrea Thomas, senior vice president at Walmart, the company has already met its goal to implement its scorecard to buyers in more than 100 categories, and will add another 100 categories by the end of the year.

FDA May Consider New Standards for Arsenic in Rice

The Food and Drug Administration may consider new standards for arsenic levels in rice following pressure from consumer groups seeking federal guidance on how much of the carcinogen can be present in food.

Rice is believed to contain higher arsenic levels than most other foods because it is grown in water on the ground, which creates optimal conditions for the contaminant to be absorbed in the rice. There are no federal standards for how much arsenic is allowed in food.

The FDA is in the midst of a study involving 1,200 samples of grocery-store rice products—short and long-grain rice, adult and baby cereals, drinks and even rice cakes—to measure arsenic levels.

Arsenic is naturally present in water, air, food and soil in two forms, organic and inorganic. According to the FDA, organic arsenic passes through the body quickly and is essentially harmless. Inorganic arsenic—the type found in some pesticides and insecticides—can be toxic and may pose a cancer risk if consumed at high levels or over a long period.

The Indian government has liberalized its retail sector to allow foreign companies, such as Tesco and Walmart, to hold a majority stake in joint ventures. The development is especially promising for the country’s food chain, because ineffective logistics results in huge amounts of wasted food every year.

Overall, “It means there will be long-term investment in the supply chain, which is the weakest link in Indian agriculture,” said Gokul Patnaik, one of the country’s leading players in the agriculture sector, who pioneered the entry of Pepsi into the country in the early 1990s.

Walmart has plans to open retail stores in India in the next 12 to 18 months, making it the first multinational to jump on the government’s decision. Previously, foreign companies could only operate wholesale outlets.

Recent reports indicate that nearly 40 percent of the food in the U.S. is wasted. Now, the European Union is under scrutiny following a study by the Food and Agriculture Organization of United Nations, which found that close to 50 percent of all fruits and vegetables in the bloc goes to waste.

These losses occur throughout the entire food chain, from “farm to fork,” but the predominant losses are linked to the production of produce, not to consumers discarding uneaten food, according to news reports.

Accidental damage during the harvesting of fruit; insect damage; mechanical damage and spillage during harvest; and crops discarded because of poor quality are some of the reasons why 20 percent of produce in Europe won’t even make it to a grocery store shelf, let alone a plate. The remaining 30 percent is due to logistics failures and other factors.

In conclusion, the study warned that if nothing was done to curb losses, food waste in the EU will grow by an additional 40 percent by 2025.

The United Nations’ Food and Agriculture Organisation (FAO) says global production of tropical fruit will reach 82 million tons in 2014, a 1.7 percent expansion over the 2004 base period. Just over three quarters of tropical fruit production is comprised of mango, pineapple, avocado and papaya.

Ninety percent of tropical fruits are grown in developing countries, where the production helps support jobs, increases farmers’ income and reduce poverty, according to the FAO. Most of the fresh tropical fruit is exported to the U.S. and EU (70 percent), followed by Japan.

In the meantime, regulatory compliance and health issues may put the squeeze on some markets. For instance, both the U.S. and EU maintain strict requirements for the import of fresh tropical fruit, and pending regulations are only going to stiffen the requirements. Global producers are going to have to make sure they meet those requirements, including labeling and traceability rules, in order to continue strong growth in the sector.

French scientists at the University of Caen say rats fed on Monsanto’s genetically modified corn or exposed to its top-selling Roundup weed killer suffered tumors and multiple organ damage. The researchers said 50 percent of male and 70 percent of female rats died prematurely, compared with only 30 percent and 20 percent in the control group.

According to Reuters news service, Monsanto spokesman Thomas Helscher said the company would review the study thoroughly. However, he added: “Numerous peer-reviewed scientific studies performed on biotech crops to date, including more than a hundred feeding studies, have continuously confirmed their safety, as reflected in the respective safety assessments by regulatory authorities around the world.”

The European Food Safety Authority (EFSA) said the study lacked sufficient scientific quality, though advocacy groups have accused the EFSA of putting the interests of biotech firms ahead of public safety concerns.

Food prices around the world are heading higher as a result of the devastating drought in the U.S. this year and water shortages in major farming areas of Russia and South America.

Analysts at Rabobank, which specializes in agricultural commodities, say the effects will unfold for a while. In particular, global food prices are expected to hit a record high in the first quarter of 2013 and keep climbing from there. By June 2013, prices could be 15 percent higher than current levels.