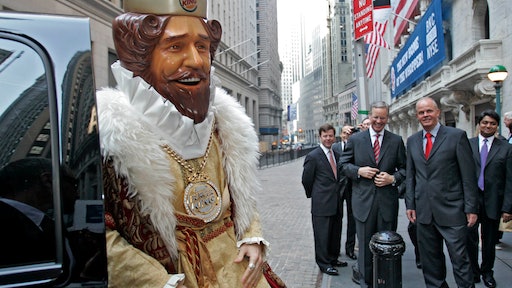 Portland, OR: The King is dead, but the burger lives on.

Burger King Corp. stated it is retiring "The King" mascot, a man with an oversized plastic head and creepy smile who in recent years has been shown in ads peeping into people's windows and popping up next to them in bed.

The move is an effort by the struggling fast food chain to boost slumping sales by focusing its marketing on the freshness of its food rather than the funny-factor of its ads. It's rolling out a new campaign on Saturday sans The King to tout its fresh ingredients and new products like its California Whopper, which has guacamole.

"We won't be seeing The King for a while," says Burger King spokesman BJ Monzon.

The new focus is a departure for Burger King, which long has targeted its ads to male teens who like to chomp its chargrilled burgers and gulp its milkshakes. The economic downturn has battered its core customer – young males have been particularly hard hit by unemployment – and Burger King is looking to boost declining sales by appealing to the mothers, families and others that rivals like McDonald's Corp. have successfully courted.

"I think it's great they are doing something as opposed to just withering away," says Joel Cohen, a restaurant marketing consultant. "They are taking an approach that is like not that much different from what McDonald's is doing and growing up."

The new focus comes as Burger King attempts to regain its edge. While competitors have grown by updating their offerings, Burger King largely stuck to its menu of burgers and fries.

McDonald's, for instance, has worked to portray itself as a healthier, hip place to eat, offering wireless access in restaurants, updating decor and introducing smoothies, oatmeal and yogurt parfaits. And Subway has grown quickly by emphasizing fresh, quick and affordable food. Burger King also has faced competition from other burger chains, like Sonic, Carl's Jr. and Five Guys Burgers and Fries.

As a result, Burger King, which was once in a neck-and-neck competition with McDonald's, has been eaten up by rivals. In 2010, the top three US restaurant chains – McDonald's, Subway and Starbucks – all reported strong revenue gains, while fourth-seat Burger King's revenue fell 2.5 percent.

In the second quarter, Burger King's net income fell more than 13 percent to $42.8 million. Its revenue fell 4 percent to $596.2 million. During the same quarter, McDonald's profit rose 15 percent to $1.4 billion and its revenue rise 16 percent to $6.9 billion.

"Whatever they are doing isn't working, so it's time to do something different," says Bob Goldin, analyst at Chicago-based food consultancy Technomic. "There is a sense of urgency to get back on their feet."

That Burger King is looking to its mascot for change is not surprising. Other restaurant chains recently have begun to use their longtime mascots less – or ditched them completely – to freshen up the brand.

Under scrutiny of its marketing to kids, McDonald's has moved away from its emphasis on Ronald McDonald, its clown mascot festooned in red wig and shoes. And the Wendy's chain no longer plays up in ads its Wendy character, which has red hair and matching freckles.

Cohen, the marketing consultant, said a chain's mascot should give a brand a better sense of identity by connecting it with consumers while entertaining them. The King, he said, did not do that. Cohen said others, such as Jack In the Box's ball-headed "founder" and Jack or Chik-Fil-a's black and white cows that encourage people to "Eat Mor Chikin," do.

Burger King has used The King mascot since 1955 when his image appeared on the sign at its first store in Miami. He's taken various forms since then, including going animated in ads and running with a crew of other food-themed royalty like "Sir Shakes a Lot."

This is not the first time The King has gone on hiatus. The company had him step down in 1989 to let a "Kids Club Gang" have a try. He returned in 2004 when the company hired a new advertising agency, Crispin Porter + Bogusky, which is known for its edgy work.

Since then, The King had become a more central – and decidedly creepy – part of ads. The mascot showed up in a variety of odd scenarios in ads, including lying next to a man in bed. But as sales fell, the company looked in a new direction.

Miguel Piedra, a spokesman for Burger King, based in Miami, said the decision to get rid of The King came as the company began looking at the business as a whole after it was acquired by investment firm 3G Capital last year. As part of that, Burger King switched ad agencies in July to mcgarrybowen.

Gordon Bowen, chief creative officer at mcgarrybowen, said the new ads celebrate good taste and the ingredients Burger King uses. Piedra said the company and agency decided to make the ads food-centric after finding that the reason people love its brand is because of the quality of its food.

"This is just the beginning of our journey a reintroduction of burger king brand to consumers," says Piedra.

As for The King, Burger King said their mascot may not be banished from the kingdom forever. He may come back at in the future in a different form. In the meantime, the company will still carry paper crowns in stores.

Copyright 2011 The Associated Press. All rights reserved. This material may not be published, broadcast, rewritten or redistributed.