Kroger revealed that its Simple Truth brand will add a number of plant-based products to its portfolio. 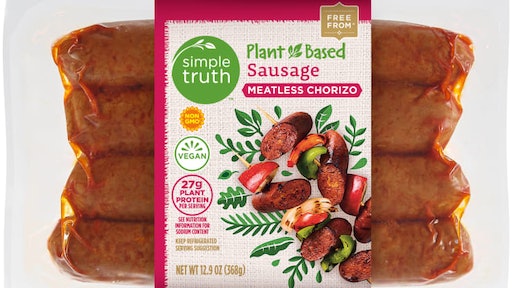 The alternative market will only increase - and retailers are starting to take notice.

Kroger revealed that its Simple Truth brand will add a number of plant-based products to its portfolio in an attempt to grab a piece of the alternative market share, CNBC reports.

The collection will be in stores this fall and will include meatless burger patties, ground imitation meat as well as plant-based cookie dough, pasta sauces, sausages, deli slices, dips and more.

“Since its launch in January 2013, Simple Truth has become the leading natural and organic brand in the country, with annual sales exceeding $2.3 billion,” Gil Phipps, vice president of Kroger’s private label brands says in a statement.

Read Next: Alternative Meat Market Expected to Reach $140 Billion by 2029

The alternative meat market is expected to surge within the next 10 years, capturing 10 percent (140 billion) of the $1.4 trillion meat market.

A report by Barclays found that investors and traditional food companies are intrigued in the sector as companies like Beyond Meat and Impossible Foods prove to be well-approved by consumers.

“Although today we believe that there are inherent barriers to successfully replicating certain animal-based consumer favorites (e.g., T-bone steaks), what has been achieved so far in terms of “meatless” ground beef, sausage and hamburger products has yielded positive initial consumer reaction, which should bode well for the alternative meat sector to grab its fair share of the global meat market,” analysts wrote in the report.

Kroger isn't the only company that is jumping on the alternative-meat train, though.

On Wednesday, Kellogg and Hormel announced a new planet-based product line. While Tyson Foods has unveiled its own plant-based line.

Meanwhile, alternative meats have seen a success in the restaurant space as more fast food chains are adopting the product. Burger King announced that it will roll out Impossible Whoppers this year after a successful trial run.

Shares of Kroger rose 1.8% Thursday, but are down 9% since January.

Making an effort to incorporate green practices into the to-go experience shows customers that you care about the environment, yet still offer a premium take-out dining experience.
World Centric
March 17, 2021
Follow Us