The California class action lawsuit filed states that Hershey’s, Mars and Nestle regularly import cocoa beans from suppliers who use child labor, including trafficked and forced child labor, specifically from plantations in the Ivory Coast. 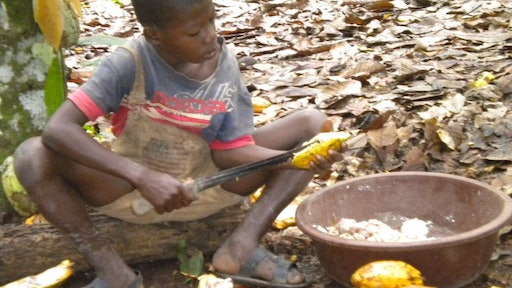 The suits state that such children are trafficked from countries neighboring the Ivory Coast, sold to plantation owners by brokers and smugglers, and forced to work under conditions of physical violence without pay. According to the World Cocoa Foundation, 47 percent of the total U.S. imports of cocoa beans come from the Ivory Coast.

Purchasers of chocolate from Nestle, The Hershey Co. and Mars Inc. have filed three class-action lawsuits against the food companies for allegedly using child labor in the production of their best-selling chocolate candy, including Reese’s Peanut Butter Cups, Kit Kat, Twix, MilkyWay, Butterfinger, BabyRuth, M&Ms and many others, according to Hagens Berman.

The lawsuits state that in violation of California law, Hershey’s, Mars and Nestle do not disclose that their suppliers in the Ivory Coast rely on child laborers and instead continue to profit from the child labor that supplies the chocolate sold to American consumers.

From 2013 to 2014 more than 1.1 million children in the Ivory Coast were engaged in the most common worst forms of child labor as recognized by the United Nations, according to the suit, up from 791,181 children from 2008 to 2009. The children subjected to the forced labor allegedly used to make Mars, Hershey’s and Nestle chocolate are victims of hazardous work such as that involving dangerous tools, transport of heavy loads and exposure to toxic substances and the compulsory labor of trafficked children.

The suits state that such children are trafficked from countries neighboring the Ivory Coast, sold to plantation owners by brokers and smugglers, and forced to work under conditions of physical violence without pay. According to the World Cocoa Foundation, 47 percent of the total U.S. imports of cocoa beans come from the Ivory Coast.

“The consumers reaching out to our firm have been outraged to learn that the candy they enjoy has a dark, bitter production cost – that child and slave labor have been a part of Nestle, Mars and Hershey’s chocolate processing,” said Steve Berman, managing partner of Hagens Berman. “These companies fail to disclose their use of child and forced labor, tricking consumers into indirectly supporting the use of such labor.”

“The lives of the people who harvest cocoa are nothing short of terrible,” the complaint reads. “Some of these children are abducted, and there are countless missing children claims. To make matters worse, sometimes extremely poor people sell their own children into slavery for as little as $30. Children that are sometimes not even 10 years old carry huge sacks that are so big that they cause them serious physical harm. Much of the world’s chocolate is quite literally brought to us by the back-breaking labor of child slaves.”

Hagens Berman has filed other lawsuits against major food manufacturers and food marketers to support local communities, human rights and the environment, including a California case filed against Chiquita for misleading consumers and manufacturing bananas in ways that poison local residents, destroy ecosystems and contaminate drinking water. The firm also filed a lawsuit against several large players in the dairy industry, including Land O’Lakes Inc., alleging that the companies conspired to fix the price of milk by prematurely slaughtering more than 500,000 cows.

How Lithium-Ion Batteries Help Warehouses Keep Up with Modern Commerce

Across the food supply chain, the industry will likely see significant changes to the IT, sanitation and automation infrastructures with the goal of creating greater efficiencies and improvements in hygiene and food safety.
JBT Corporation
September 21, 2020

Atar Capital has completed the acquisition of WinCup from funds managed by BlackRock, Inc.
WinCup
September 10, 2020

The initiative helps customers enjoy their favorite McDonald’s hot drink in a reusable cup, while cutting down on packaging waste
McDonald's Corp.
September 10, 2020

This investment is the first to utilize Nestlé's packaging venture fund established earlier this year, which is part of the company's overall investment of up to CHF 2 billion to accelerate the development of innovative sustainable packaging solutions.
Nestlé
September 9, 2020

Re-Imagining the Food Supply Chain in the Age of Instability

Now is the time to think about how new technology can embed in existing networks and optimize outcomes.
Michael Helmstetter
April 10, 2020

Available for order in the contiguous United States, the online shop brings plant-based meat products directly to customers’ doors, with 2-day shipping included on all orders.
Beyond Meat
September 4, 2020

Harpak-ULMA announced the official launch of its innovative PaperSeal packaging technology as part of the company’s initiative to fundamentally rethink packaging systems to promote green packaging alternatives across the food industry.
Harpak-ULMA
August 31, 2020

Why the Industry Needs an Agile Food System

Looking to the future, what’s needed is an agile food system. It must be flexible and adaptive to unexpected disruptions. It must eliminate food waste and reduce the time and distance that food must travel.
FoodMaven
August 26, 2020
Follow Us