There’s been an unexpected push recently to create hyper-dense farms in the land of wide open spaces, according to NET, Nebraska’s PBS and NPR stations. 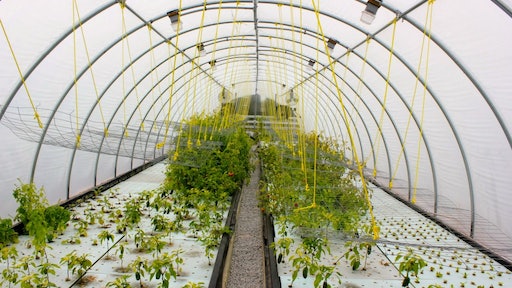 While food hubs and farmers markets have sprouted up in urban areas, the local food economy has taken off more slowly in much of rural America. There’s been an unexpected push recently, however, to create hyper-dense farms in the land of wide open spaces, according to NET, Nebraska’s PBS and NPR stations.

Nate Storey’s greenhouse in Laramie, Wyoming is packed with vegetables growing in long, upright plastic towers. Storey’s set up is an urban farmer’s dream. The waste from fish tanks fertilizes the crops through plastic tubing that drips water onto the vertical garden. The greenhouse is small, but produces a lot of food. Like a proud father he shows off bok choy, butter lettuce and spinach.

“You can grow anything,” Storey said. “We’ve grown tomatoes and very large statured crops.” Storey said they’ve even grown watermelons. “It works until they’re about 20 pounds a piece and then things start falling.”

Outside the greenhouse the wind howls, the winters are frigid and the soil is either silt or clay. If you want to grow crops people actually eat in Wyoming, Storey says you have to do it indoors. Storey pitches his business as a local economic generator that produces fresh food, replacing some of the produce shipped from thousands of miles away.

Karen Panter, a University of Wyoming horticulture extension specialist, says some in Wyoming think of their state as one big, small town. Panter says, until recently, there just wasn’t an interest in growing large quantities of vegetables in Wyoming.

“Because we are a rural state, we don’t have, or did not historically have a lot of our own production,” Panter said. “Virtually everything other than beef or a few other crops have been brought in from other states or abroad.”
But now there’s more interest in growing food in Wyoming. The number of greenhouses here tripled from 2007 to 2012.

Nona Yehia is one of the architects behind Vertical Harvest, a high density, three-story greenhouse currently under construction in the ritzy ski town of Jackson, Wyoming. Its high-end restaurants and wealthy visitors make Jackson the ideal market for local food. But some basic logistics are hard to get past.