Americans have also increased their spending on items related to the coming winter months and preparation for the flu season. 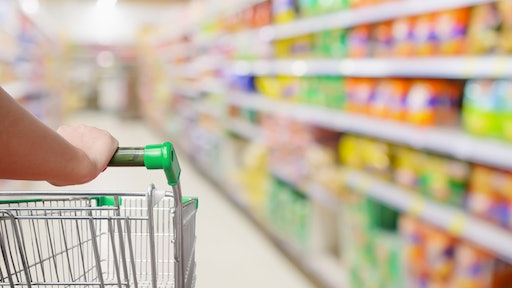 Hand sanitizer, which was up 465% in October 2020 as compared to October 2019, continues to be a  top-growing category. Other top-growth categories for the month compared to last year are gum (388%), shelf-stable convenient breakfasts (373%), premixed alcohol cocktails (167%) and refrigerated wraps (108%). 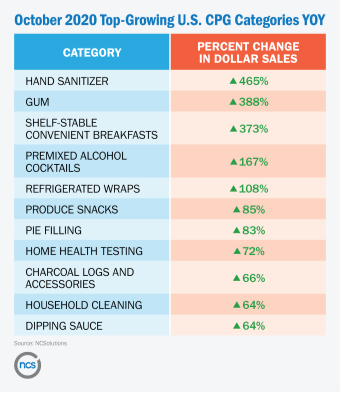 Americans have also increased their spending on items related to the coming winter months and preparation for the flu season. Year-over-year spending increased on home health testing (72%), such as thermometers and blood pressure kits, and charcoal logs and accessories (66%) in October.

“Early in the pandemic, Americans stocked their pantries in the face of stay-at-home and lock-down orders. After the peak of this Extreme Buying phase, the level of CPG spending began to drift downward. However, year-over-year elevated spending has been consistently in the double digits throughout the Home-Confined phase. The high in March was 36%; the lowest it dropped to was in August — at 14%,” said Linda Dupree, CEO, NCSolutions. “Since then, we’ve experienced periodic increases in grocery spending, mostly due to growing consumer angst about supply chain issues, the ability to source foods in restaurants and stay-at-home orders that keep people closer to home. These consumer concerns coupled with the increase in COVID-19 cases – are what will drive spending behaviors over the coming winter.”

“We’ve seen CPG brands react to the pandemic with their advertising in a variety of ways— everything from pausing their campaigns to accelerating in order to take advantage of upended shopping habits,” said Lance Brothers, chief revenue officer, NCSolutions. “The bottom line, in both boom and bust times, is that advertising works and is vital to the fabric of brands. A key to retaining loyal shoppers and maintaining -- or even growing -- market share is a continued relationship  with consumers. This is  especially true during times of market disruption.

The composition of Americans’ grocery carts shifted in October, as consumers purchased more hot foods – such as hot cocoa, tea and hot cereal. Preparations for the Thanksgiving holiday also played a role in what was added to their carts, as items such as pie filling, gravy and stuffing moved up in the rankings.

Household spending on consumer packaged goods has followed the same trajectory across regions during the pandemic — rising and falling at the same points — but there are distinct differences in average household spend, grocery basket size and number of trips. 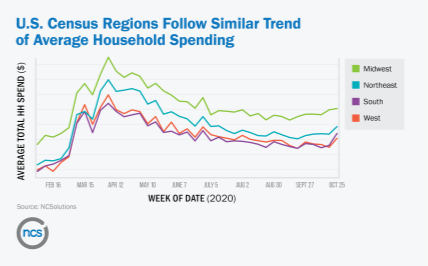 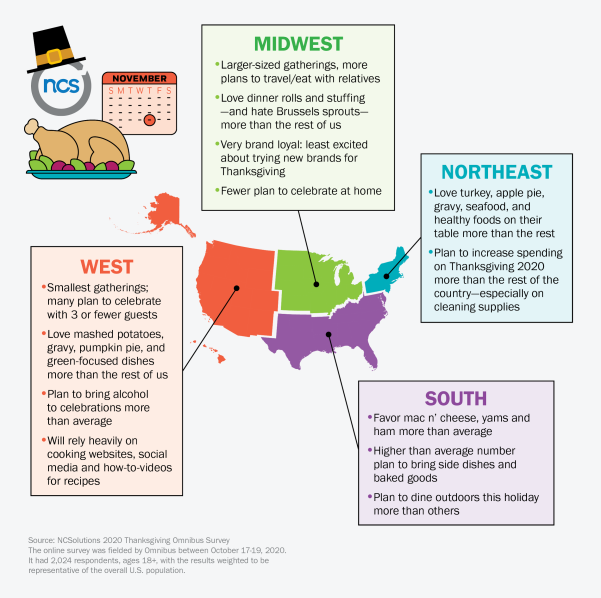 From Increased Fulfillment to Drones, Here’s the Latest Trends in Food Logistics

Changes are occurring in store fulfillment and in-store experiences alike, with retailers rolling out everything from biometric payment to delivery robots. Here are the latest trends.
Shekar Raman
December 19, 2020

Similar to earlier this year, shoppers continue to keep a supply of products on hand for longer periods of time, from categories throughout the store, including fresh and shelf-stable items.
Retail Feedback Group
December 16, 2020

The study details the reliance on these out-of-date methods is costing companies – both financially and in their ability to deliver to their end consumer.
CloudLeaf Inc.
December 15, 2020

E-commerce measures in the U.S. alone show that new online buyers of fast-moving consumer goods (FMCG) have emerged across all age cohorts, even among those over the age of 65 who represent between 14-24% of new buyers across merchants.
Nielsen
December 11, 2020

As with every year, health will be a major driver of consumer attitudes and innovation in the market over the next 12 months.
FMCG Gurus
December 7, 2020

If the COVID-19 pandemic has revealed anything, it is that the physical attributes of omnichannel grocery retailing may be just as important, if not more so, than delivery.
Takeoff Technologies
December 7, 2020

Adopting IoT devices will allow grocers to remain competitive and adapt to an ever-changing business landscape, while prioritizing the health and safety of their customers and employees.
Kyle Payne
December 2, 2020

Here’s how rational automation can meet the needs of grocers and customers alike.
Matt Walker
December 2, 2020