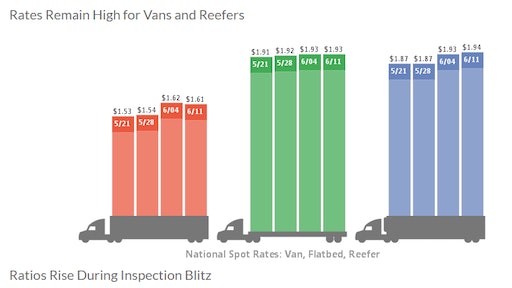 The number of posted loads on the spot truckload freight market was up 36 percent during the week ending June 11, according to DAT Solutions, which operates the DAT network of load boards.

That made it another good week for carriers as load-to-truck ratios all jumped substantially: the van load-to-truck ratio was 3.1 loads per truck, up 23%; the reefer ratio climbed 29 percent to 5.9; and the flatbed ratio was 20.3, a 10 percent increase compared to the previous week.

- Van: $1.61/mile, down a penny despite increases in average rates in major markets.
- Reefer: $1.94/mile, up 1 cent on higher rates out of California, the Northeast, and Midwest.
- Flatbed: Unchanged at $1.93/mile. A 1-cent drop in the line-haul rate was offset by a 1-cent increase in the fuel surcharge.

Rates rose sharply on the top 100 van lanes last week as demand for vans fell just 4 percent instead of the 20 percent drop expected during a four-day work week. Consumer goods are moving through the retail supply chain and the added freight is driving rates up.

Traditional backhaul lane rates are softer. For example, van loads from Phoenix to Denver are paying 18 cents more in June so far than they did in May, but the backhaul from Denver to Phoenix dropped to 95 cents mile.

In the reefer market, vegetables and tree fruit in California are now moving with grapes expected soon. The average outbound rate from Fresno, Calif., was $2.21 a mile last week, up 8 cents, while Los Angeles jumped 11 cents to $2.59. Nearly all the lanes out of Florida lost traction; Lakeland to Charlotte fell 24 cents to $1.66 a mile, the region’s largest decline.

For complete national and regional reports on spot rates and demand, visit dat.com/Trendlines or join the conversation on Twitter with @LoadBoards.