The load-to-truck ratio is a sensitive, real-time indicator of the balance between spot market demand and capacity. Changes in the ratio often signal impending changes in rates. 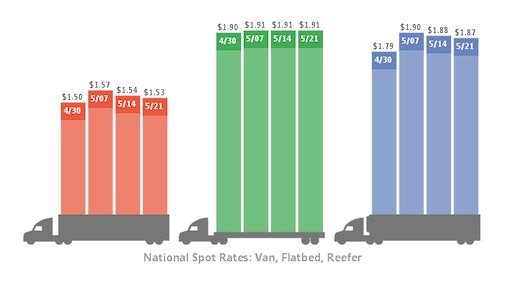 Load-to-truck ratios increased and diesel prices have been rising sharply—an indication that spot rates may pick up soon.

Spot truckload freight volume and available capacity both fell during the week ending May 21, reported DAT Solutions, which operates the DAT network of load boards.

However, load-to-truck ratios increased and diesel prices have been rising sharply—an indication that spot rates may pick up soon.

The number of spot market load posts fell 4 percent, driven by a 6 percent drop in flatbed load volume. Fewer truck posts compared to the previous week helped boost load-to-truck ratios across all three equipment types: the van ratio gained 1 percent, to 1.7 loads per truck; the reefer ratio increased 18 percent to 3.3; and the flatbed ratio was up 5 percent to 15.4. Load-to-truck ratios measure the number of loads posted for each available truck on the DAT network.

National average spot TL rates held firm last week. The van rate was down 1 cent to $1.53/mile, the reefer rate was down a penny to $1.87/mile, and the flatbed rate was unchanged at $1.91/mile for the third week in a row.

Spot reefer rates rose on more than half of the highest-volume lanes. The high-dollar market in each region:

Atlanta and Lakeland, Fla., are still No. 1 and 2 for reefer load posts on DAT load boards, though volumes slipped a bit in Central Florida.

Volume was up in Houston, the country’s No. 2 market for van load posts on DAT load boards after Atlanta. Chicago’s average outbound rate was down 2 cents to $1.71/mile, and rail competition is killing the shipping lane from Chicago to L.A.: the average spot van rate lost another 14 cents to just $1.05/mile.