Subway To Serve Only Antibiotic-Free Chicken

Beginning in March 2016, Subway customers across the U.S. will able to order meals made with chicken raised without antibiotics. 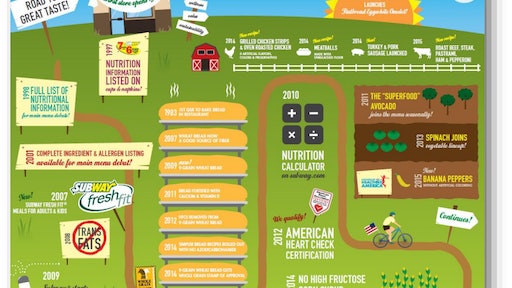 Subway Restaurants is beginning to transition to serving only protein from animals that have never received antibiotics across all of its 27,000-plus U.S. restaurants in early 2016.

The company announced the following measures:

“Today’s consumer is ever more mindful of what they are eating, and we’ve been making changes to address what they are looking for,” said Dennis Clabby, executive vice president of Subway’s Independent Purchasing Cooperative (IPC). “A change like this will take some time, particularly since the supply of beef raised without antibiotics in the U.S. is extremely limited and cattle take significantly longer to raise. But, we are working diligently with our suppliers to make it happen.” “Given the size and scope of the Subway brand, this commitment is the largest of its kind in the restaurant industry,” added Clabby. “We hope that this commitment will encourage other companies in our industry to follow our lead, and that, together, this will drive suppliers to move faster to make these important changes for consumers.”

Water is Essential Ingredient in Food and Beverage Supply Chains. Here’s How to Protect it.

First and foremost, it must be understood that water stewardship is not a corporate social responsibility (CSR) issue. It’s a business issue with bottom-line impact.
Anheuser-Busch InBev
November 25, 2020

This joint venture will utilize and combine the growing technology of NaturalShrimp with the Renewable Energy Efficient Farms (REEF) technology owned by Ecoponex.
November 24, 2020

Delivering Wild Seafood in the Time of COVID-19

Food is the single largest line item on a food business’ profit and loss statement, yet its waste is largely unaddressed.
Luc Dang
November 9, 2020

The global meat sector at present is facing unprecedented level of disruption and competition, due to mounting growth of plant-based alternatives across many categories.
Future Market Insights
November 6, 2020

The Fresh-Lock team highlights the brand’s new sustainable closure advancements in its 8000 series, ongoing green initiatives, and the latest closures that are helping the brand expand its presence in multiple markets.
Fresh-Lock
November 5, 2020

Cold storage has become one of the hottest topics in the commercial real estate industry.
Transwestern
October 29, 2020

Despite the impact of the COVID-19 pandemic on the egg industry, companies and producers continue to make progress on their commitments to source only eggs from hens that are cage-free by 2026 or sooner.
October 29, 2020

This investment marks its first in an existing US-based OEM, and Ideanomics will assume a seat on Solectrac’s Board of Directors.
Ideanomics
October 26, 2020
Follow Us