Experts at the University of Connecticut's Avery Point campus consider how science, education and public advocacy could be applied to ensure the global resource is sustainable. 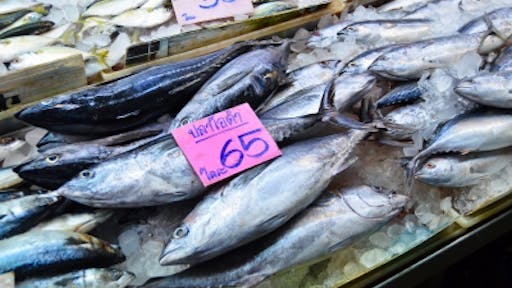 As Congress prepares to reauthorize the law that manages the nation's fisheries, a panel of experts at the University of Connecticut's Avery Point campus this week considered how science, education and public advocacy could be better applied to ensure that this regional and global community resource is sustainable.

"If we all took the perspective of the fish to make decisions based on what would be good for the fisheries, it would be wonderful," David Monti, captain of the Rhode Island-based No Fluke Fishing Charters and a newspaper fishing columnist, said during the forum Thursday.

Monti was one of five panelists at the forum, titled "Sustaining Our Fisheries: Looking at the Big Picture" and sponsored by Save the Sound, a program of the Connecticut Fund for the Environment. About 50 people attended.

The purpose of the event was to raise awareness about the issues facing populations of forage fish such as herring as well as commercial species as Congress considers renewing the Magnuson-Stevens Fishery Conservation and Management Act, which has enabled the recovery of 34 fish populations since 2000, according to Lee Crockett, moderator and director of U.S. oceans for the Pew Charitable Trusts.

One of the key gaps in fisheries management, said Stephen Gephard, supervisor of the Diadromous Fish Program and the Habitat and Conservation Enhancement Program at the state Department of Energy and Environmental Protection, is a lack of appreciation for the role of forage species such as herring. The various types of herring, he said, "are the species in this world that feed the masses," and they must be abundant for the top-of-the-food-chain larger fish to thrive.

"Ten thousand blue-backed herring in the Connecticut River are ecologically meaningless," Gephard said. "That number may be biologically viable, but ecologically irrelevant."

Efforts to restore herring populations must have the goal of returning them to abundance, not just to a level safe from extinction, Gephard said.

Matthew McKenzie, associate professor of history at Avery Point and delegate to the New England Fisheries Management Council, agreed that more attention must be paid to the fate of forage species such as herring. McKenzie, who has researched the herring industry on Cape Cod, said the current herring fishery is controlled by two or three companies that harvest tons of the small fish mainly for bait. The impact of the herring fishery in diminishing the abundance of other species that depend on herring for food is many times greater than the economic contribution it makes, he said.

"We're hobbling the ability of others to make a living," he said. "Fishing for herring as an end product makes little sense."

McKenzie said he is concerned that the Magnuson-Stevenson Act will be weakened in its reauthorized version and called on audience members to contact their congressmen to urge against that.

Based on what he sees on his charter boats and hears about in interactions with other fishermen, Monti said, there are some positive signs about the state of the New England fishery. Striped bass and summer flounder have been restored to abundance, he said, and recreational fishermen are increasingly conservation-minded. Future fisheries management decisions, he said, must take into account changing conditions in the oceans. As examples, he showed photographs of recent catches of cobia, a warm-water tropical fish, in Rhode Island waters, as the fish move north with the warming ocean waters attributed to climate change. Classic North Atlantic species such as cod and haddock, however, are leaving the area.

Recreational anglers, Monti said, are becoming organized to lobby for better management of fisheries, but more effort is needed to raise their awareness and get them involved. "If we can tap into that resource, we could mobilize a great force," he said.

At the Maritime Aquarium in Norwalk, exhibits and activities for visitors have been created to engage people in understanding the issues facing marinelife and how they can help, said Jennifer Herring, its president and chief executive officer. "By suggesting small but significant actions and focusing on youth, we're trying to give people a way to be part of the solutions," she said, citing one exhibit focusing on seafood sustainability that displays common fish-market species such as halibut, salmon, pollack and flounder. The aquarium, she added, also takes 8,000 visitors per year on research vessels into Long Island Sound, where they get "hands-on experience in this ecosystem."

Crockett said the panelists' main messages were about the need for big-picture thinking, more education and increased regulation when it comes to fisheries management. "There's a need to broaden management, and the science is there to do that," he said. "There are educational challenges and needs, and the current system isn't going to be able to do it. We think the law needs to be stronger, and we need to get managers to take a larger view."

Panelist Peter Auster, professor emeritus in the Marine Sciences Department at Avery Point, said individual species populations would be better managed if decisions were based on their place in the entire context of its habitat, on the various types of fishing gear used in different habitats, and an understanding of how they interact with other species, among other factors. This broader approach would bring modern science tools to bear on modern fisheries, he said.