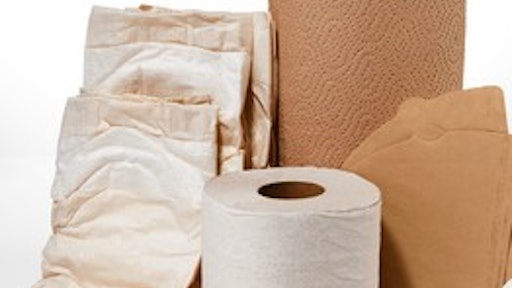 Brown napkins, paper towels, coffee filters and even diapers are increasing in popularity as companies play up an image that brown means less chemicals, Sarah Nassauer reports on Lunch Break.

Dunkin' Brands Inc. and Target Corp.'s in-store cafes among other chains have made the switch from white to brown napkins. Next week, Cascades Tissue Group is trying what marketers long considered the unthinkable: brown toilet paper. It is pitching beige rolls, dubbing the product "Moka."

Brown paper products are becoming an obvious way for consumers to show that they care about the environment. They assume the products are made with recycled materials or didn't involve whitening chemicals.

Now, however, white paper can be made from 100 percent recycled fibers and whitened without the chemical chlorine, traditionally the primary complaint against it. Still, Cascades says dropping the extra step of bleaching reduces the environmental impact of Moka toilet paper by about 25 percent compared to their white recycled paper because of energy savings and other benefits.

Even so, Dunkin' Donuts decided to use recycled brown napkins about three years ago, in part because of what the color "symbolized," says Scott Murphy, vice president of strategic manufacturing and supply for Dunkin' Brands. Tests in a handful of restaurants showed the brown napkins made customers "feel like they were doing something good for the environment," and matched the décor, he says.

At least one company adds brown pigments to non-chlorine bleached diapers to drive home the environmental message. The diapers need "visual differentiation," says Louis Chapdelaine, product director of fibers at Seventh Generation Inc., a Burlington, Vt.- based company that specializes in eco-friendly household cleaning products and paper. It's important "not so much that it's brown, it's that it's not white," he says. All diapers, if left undyed, would be the color of raw plastic or semi-translucent, he says.

Nonwhite, recycled papers come in a range of hues, from dark brown to beige to off-white speckled with bits of brown.

Paper bleached without chlorine is usually whitened with a combination of hydrogen peroxide, oxygen or ozone, chemicals environmentalists have few complaints about. The most harmful, pure form of chlorine, what is called elemental chlorine, is no longer used to bleach paper in the US Recycled paper is sometimes slightly rougher than paper made of virgin fibers from trees because it is made of shorter fibers or comes from different sources, not because of the bleaching process.

To get its toilet paper the perfect color—not too "gray and dirty" or "dark brown"—Cascades makes the rolls with a recipe of 20 percent recycled corrugated box combined with other fiber, says Isabelle Faivre, marketing director for Cascades Tissue Group, owned by Cascades Inc. and one of the largest sellers of paper towels and tissues in North America.

Americans are especially picky about toilet paper and use more of it on an annual basis that any other nation.

Danielle Schneider, a 36-year-old writer and actor who lives in Los Angeles, says she is willing to buy inexpensive or recycled napkins and paper towels, but she is loyal to Charmin Ultra Soft, a P&G brand. If a store doesn't carry it, "I will go to another store," she says.

Consumers in regions outside of North America are more accepting of recycled toilet paper and more readily embrace colored or fragranced rolls. Kimberly-Clark's local brands sell apricot-colored paper in the UK, green in Poland, "sunny orange" in Switzerland and "natural pebble" in Germany, the company says.

It's a different story in the US When Cascades pitched its Moka toilet paper to distributors at a recent trade show, "faces showed disgust" at first, says Ms. Faivre. "Then they would feel the product and it was, 'Oh, wow, that would be perfect,' " for customers who want softness, but also want green credentials, she says.

"Dark greens," or businesses and people that prioritize environmental concerns, will be the early adopters, predicts Brian Carlson, director of consumer products for the company. "Light greens," will be harder to nudge away from white, he says. "Those are the soccer moms that like to be green, but they don't want to compromise. They don't want to pay more. They want the same quality."