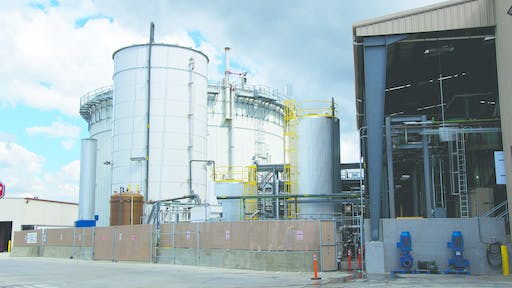 The Kroger Co. is pioneering a solution to take a bite out of the estimated $15 billion the USDA says supermarkets lose annually in unsold fruits and vegetables, let alone other organic materials. Recently, the grocery chain worked with FEED Resource Recovery, Inc. (FEED), a clean technology company, to implement a zero waste system called the Kroger Recovery System, where food that cannot be sold or donated (a value fostered by Kroger) is converted into clean energy and used to help power its 59-acre Ralphs/ Food 4 Less distribution center in Compton, California.

At the heart of the Kroger Recovery Sys­tem is an anaerobic digester. Anaerobic diges­tion is a naturally occurring process that’s used to transform organic food waste into renewable methane biogas. FEED’s system operates in an enclosed oxygen-free environ­ment, which means the anaerobic digestion process generates no odors. Through its relationship with FEED, Kroger has emerged as the first national gro­cery chain to successfully profit from food waste. The company has not released the project cost, but does expect an 18.5 percent return on their sizeable investment.

The Kroger Recovery System hits several high notes on the sustainability front, starting with food waste. According to an August 2012 report by the Natural Resources Defense Council, food waste at the retail level in the supply chain is considered a “cost of doing business.” The report highlights specific contributing issues such as: overstocked products, unregulated sell/use/best by dates, and lot or “pack” size purchasing decisions.

Equally impressive are the benefits on the transportation and energy side. Previ­ously, food waste from Ralphs and Food 4 Less stores was trucked six times a day to a processing facility in Bakersfield, CA, about 130 miles north of Los Angeles. By relocat­ing the food waste processing function to the Compton, CA distribution center (near the Los Angeles-Long Beach port complex), Kroger is eliminating roughly 500,000 truck miles annually, and the effort supports the company’s plan to decrease its “empty miles” cost by 10 percent by 2014, as stated in their 2012 sustainability report

Not only are greenhouse gas emissions reduced, but high fuel costs, too. According to the U.S. Energy Information Administra­tion, the West Coast region has the highest U.S. on-highway diesel fuel prices at $3.945 per gallon (as of 6/10/13).

Meanwhile, the renewable methane biogas produced at the Ralphs/Food 4 Less DC will be used to offset 20 percent of the energy costs at the 650,000 square-foot facility, which also boasts over 150 zero emission fuel cell forklifts.

Kendra Doyle, group vice president, pub­lic relations & government affairs, for Ralphs, told Food Logistics that she expects similar projects to be rolled out at other Kroger loca­tions throughout the U.S.