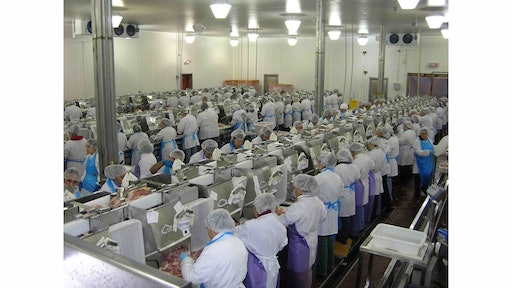 Ozark Mountain Poultry, based in Rogers, Ark., produces 1.5 million pounds of hand-deboned poultry per week in more than 25,000 square feet of production space, supported by another 50,000 square feet of quality control, coolers and docks. The company has developed an RFID tracking system that has improved its productivity and efficiency. While the company first introduced the RFID tracking system 10 years ago, new features have been added, notes Scott Southerly, plant manager.

Ozark Mountain Poultry has found that RFID technology allows the company to capture real-time information at different points of the production and delivery process. In addition to improving efficiencies, the RFID technology provides a higher level of transparency for its manufacturing and distribution. This proves beneficial in tracing quality issues if and when they occur.

The company is among those that have discovered the RFID tag’s unique capability to record what happened when in a production and distribution process. RFID read/write devices enter information at critical points in the process determined by the company’s staff IT programmer.

In a chicken processing plant, the deboning process is one of the most labor intensive functions. Deboners remove bones from raw chickens, and then place them in tubs on a converyor line to a packing area. Prior to introducing RFID, workers at Ozark Mountain Poultry weighed chickens, wrote the weight on a container with a grease pen, then sent them on to deboning stations. Once the deboner cleaned the chicken, new weights were marked using grease pens. The deboner placed the chicken on a conveyor belt and sent it to a quality control station where the chicken was weighed again. At the quality control station, another worker compared the deboned weight to the raw weight.

Under the old system, if a quality issue occurred, it was time consuming to determine where a problem occurred in the production process. The information on the containers was manually recorded and entered into the system.

With the RFID tags automatically keeping track of products, there is no need to mark the containers or manually enter the information into the system.

The raw chicken weights are entered into the software system automatically. Raw chickens are placed on a conveyor line after they are weighed and sent to a deboner station. The deboner removes the bones and cleans the chicken and places it into a tub that has an RFID tag attached to it. An RFID read/write device at the work station enters a code noting the particular deboning work station and the time the tub leaves that station. The deboning process typically takes about 15 minutes, according to Southerly.

The tub then goes to a weight scale at the end of the deboning line where it gets weighed again. A quality assurance (QA) tech physically examines the chicken before weighing it a second time. Another RFID reader records the new weight, at which point the tub gets sent to a packout station. If there is a problem with the chicken, the QA tech sends it back to the person who deboned it. Should there be a problem after the chicken leaves the QA station, the system has a record of who had the chicken and when.

In addition to improving efficiency, the system allows the company to pay workers based on productivity. Workers are paid based on how many pounds of chicken they debone.

In 2009, the company installed video screens in the deboning stations to allow deboners to see who the top producer is at any given time. The list has motivated employees to work faster and better, Southerly notes. “It has helped us with quality,” he says. “There’s more accountability and better understanding of what’s happening.”

How AI is Checking What We Eat

With the help of automation and AI, manufacturers now have a window of opportunity to inject more intelligence at virtually every level of the food supply.
Neurala
October 18, 2021

E-Commerce Solutions: Are they Worth the Investment?