Despite industrialized farming’s ability to produce more food and do it faster, manual labor remains a critical component for growing, harvesting and processing food across the U.S., and Latinos comprise the majority of those workers. 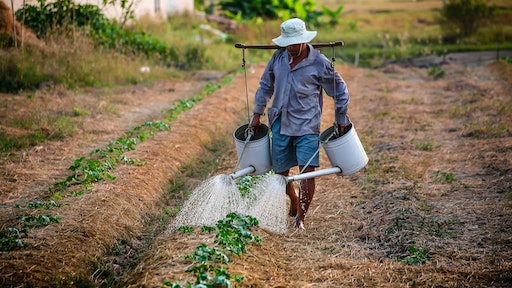 Despite industrialized farming’s ability to produce more food and do it faster, manual labor remains a critical component for growing, harvesting and processing food across the U.S., and Latinos comprise the majority of those workers.

According to the U.S. Department of Agriculture’s Economic Research Service, “Large numbers of hired farmworkers are Hispanic immigrants, and many lack authorization to work legally in the United States.”

It’s no secret that picking crops in a field or processing chickens in a plant is undesirable work to say the least. It’s monotonous, hard on the body, and workers are often exposed to the elements or standing for hours processing livestock, poultry or fish. To top it off, the pay is among the lowest in the American workforce.

Read next: A Long Ago and Faraway War: Lessons Learned for Food and Agroterrorism Defense

This fuels the need for low paid workers willing to do this kind of work, but immigration crackdowns are having an effect. For the past few, farmers in California—the biggest agriculture state in the country—have had a more difficult time attracting workers. Workers fear ICE raids and deportations.

Notwithstanding the political and economic aspects of food production in the U.S., especially as it pertains to labor and who’s doing it; there’s also a growing risk to food safety.

In April, Tom Nassif, president and CEO of Western Growers, which represents fresh produce farmers in Arizona, California, Colorado and New Mexico, told the House Judiciary Subcommittee on Immigration and Citizenship that the current immigration policies combined with an aging workforce is contributing to a shortage of farmworkers.

Moreover, “The simple fact is this: Fruits and vegetables that are eaten in the United States will be harvested by foreign hands,” said Nassif.

Think about that for a minute.

It’s challenging enough to protect the food supply chain from intentional adulteration within the U.S. given the exposure and vulnerability inherent to farms and many aspects of food production; imagine how that risk is compounded for food harvested or produced outside of the U.S.

Planting the Seeds for Agroterrorism

Agroterrorism is defined as terrorist acts aimed at disrupting or damaging a country’s agriculture, particularly through the use of a biological agent against crops or livestock.

The Food Safety Modernization Act (FSMA) includes a rule aimed at “preventing intentional adulteration from acts intended to cause wide-scale harm to public health, including acts of terrorism targeting the food supply.”

We typically think of a disgruntled employee who is acting alone. His or her actions may be lethal, but they’re limited in scope. On the other hand, agroterrorism by a foreign group or organization intent on harming or killing many people is truly frightening.

In her opening remarks during a November 2003 Senate hearing on “Agroterrorism: The Threat to America’s Breadbasket,” Sen. Susan Collins (R-Maine) said, “Hundreds of pages of U.S. agricultural documents recovered from the Al Qaeda caves in Afghanistan early last year are a strong indication that the terrorists recognize that our agriculture and food industry provide tempting targets.”

Collins added that, “Al Qaeda’s interest in agriculture is not limited to studying documents. These killers have practical, hands-on knowledge. A CIA report released in May confirmed that the September 11 hijackers expressed interest in crop dusting aircraft, an effective and remarkably simple way to spread biological agents, including plant and animal diseases, over large areas.”

The Western Growers and other organizations, such as United Fresh, support immigration reform and an overhaul of the H-2A agricultural guest worker program, as well as wages that are fair and predictable.

We also need to get honest about who and what poses the most serious threat to our food supply chain, and it’s not undocumented Latino workers.