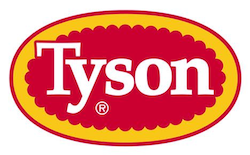 Yolanda Thompson allegedly signed certificates suggesting she had checked slaughtered hogs that the Storm Lake plant in March 2018, but video footage indicates that Thompson never entered the plant and reportedly approved inspections while in her vehicle.

In the suit, Tyson alleges that the USDA and Food Safety Inspection Service knew of Thompson's poor inspection practices and physical difficulties walking around the plant.

"The United States should have recognized Thompson's unfitness to perform the inspections that were necessary for the protection of Tyson's property. However, the United States failed to so recognize, resulting in the destruction of approximately 8,000 hog carcasses, causing injury to Tyson," the company said in the lawsuit.

According to The Kansas City Star, inspectors are supposed to visually examine all hogs slaughtered at the plant and decide whether they have health conditions that make them unsuitable for human consumption.

After Thompson's visit on March 26, 2018, Tyson killed over 4,000 hogs at the plant after Thompson gave signed inspection cards to plant supervisors. The lawsuit alleges that plant administrators were told by Food Safety staffers the next day that Thompson had not executed the inspections. The USDA then decided on March 30, 2018 that it was not feasible to determine whether the hogs had been checked or not, forcing Tyson to destroy 8,000 carcasses, included the inspected and uninspected.