The strike in Corona comes just days after 200 Maryland Teamsters began their own unfair labor practices strike at US Foods' Severn, Md. facility for failing to bargain in good faith. 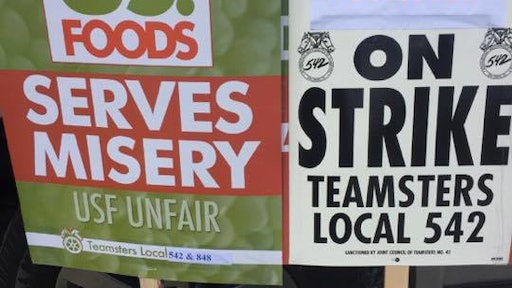 Teamsters who drive for US Foods in Corona, Calif. have launched an unfair labor practice strike to protest allegations that the foodservice company violated federal law that protects workers' rights.

Teamsters who drive for US Foods in Corona, Calif. have launched an unfair labor practice strike to protest allegations that the foodservice company violated federal law that protects workers' rights. Almost immediately, Corona workers extended their picket line to 10 other US Foods distribution centers and resident yards in Southern California and Phoenix, Ariz., where 750 Teamsters have ceased work to honor the picket lines.

In all, more than 800 Teamsters employed by US Foods are currently not working because of the strike and extensions. There are 92 drivers represented by Locals 848 and 542 currently on strike in Corona. Meanwhile, about 750 workers represented by Locals 87, 495, 542, 630, 848 and 986 in La Mirada, Calif.; Local 542 in Vista, Calif.; and Local 104 in Phoenix are honoring the picket line extensions. Additionally, warehouse workers in Corona, represented by Teamsters Local 63, have given notice of their intention to honor the picket line there—under their contract they must wait until Wednesday to do so.

Steve Vairma, Teamsters international vice president and director of the Teamsters' warehouse division, said, "US Foods has a pattern of abusing its workers and being willing to destroy good jobs and local economies. Unfortunately, it's no surprise that the company has provoked three unfair labor practice strikes in recent months. I'm proud of our members who are standing up for their rights and of our brothers and sisters who are honoring their picket lines. Teamsters know that an injury to one is an injury to all."