Eight feet of added ceiling height may not seem like a lot, but for warehouse builders, the extra clearance can be the difference between an empty building and one that attracts a tenant such as Walmart.com or Amazon.com. 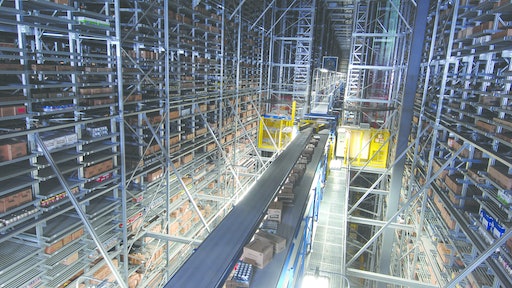 ES3’s facility in York, Pennsylvania serves as both a manufacturers’ mixing center and a retailers’ distribution center.

The e-commerce boom is changing the way industrial properties such as warehouses and fulfillment centers are built, causing developers to build higher warehouses, according to The Wall Street Journal.

Eight feet of added ceiling height may not seem like a lot, but for warehouse builders, the extra clearance can be the difference between an empty building and one that attracts a tenant such as Walmart.com or Amazon.com.

Real-estate firm Prologis Inc. ’s latest project, a one-million-square-foot warehouse in Tracy, Calif., will boast a 40-foot-high ceiling, 25 percent taller than the typical 32 feet. The project isn’t pre-leased, making this the first speculative building of such dimension that the company has built.

Prologis executives said it is going bigger to tap into the e-commerce boom, which is changing the way industrial properties such as warehouses and fulfillment centers are built. E-commerce retailers need more space than do wholesalers that ship goods in bulk to stores, because they transport a vastly wider variety of products in much smaller batches.

E-commerce companies need workers to pick out and pack each product by hand. They often build multiple mezzanine levels and racking systems known as “pick modules,” which are typically about nine feet high. Ceiling heights of 40 feet, rather than the industry-standard 32 feet, allow a distributor to build three levels above the ground floor instead of two, and still leave room for light fixtures and fans.

The share of retail sales conducted online has been growing steadily since at least 2005, clocking in at 6.7 percent in the fourth quarter, according to the Census Bureau. The increasing sales online stimulate the need for more spaces to stock, sort and pack shipments to send to shoppers.

Most warehouse construction in recent years has been of structures with ceiling clearances of 28 to 36 feet. Since 2011, of the 554 large warehouses built in the U.S., 89 percent have had ceilings between 28 and 36 feet high, according to brokerage CBRE Inc. Only 52, or 9.4 percent, have had heights of 36 feet to 40 feet, and only 11 have had heights above 40 feet.