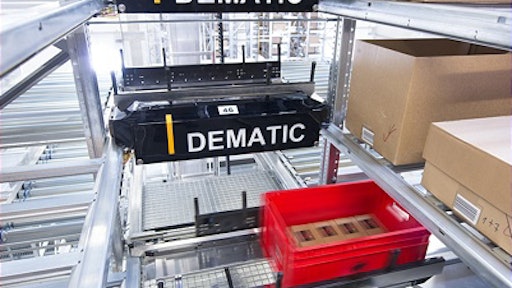 The order fulfillment system features Dematic Multishuttle inventory staging technology, as well as “goods-to-person” pick stations. General merchandise and food items, to be distributed to retail stores throughout New England, will be received at the distribution center and staged in the Multishuttle. When the order assembly process begins, inventory is automatically removed from the Multishuttle and delivered to work stations. The warehouse staff will pick items from the inventory containers at the ergonomically designed workstations instead of traveling throughout the warehouse to pick product.

Mike Bourgoine, Associated Grocers of New England President and CEO, said that the expansion was due to "our growth in products, services and customers. With the increase in SKUs over the past decade, we needed to reduce the number of "touches" to increase our efficiency and maximize the use of our square footage. This automated technology will help to support additional item growth in a small footprint, offering our customers a vastly expanded selection of food products."

"The solution engineered by Dematic will create logistics results while supporting additional specialty food items and improved service to store customers. With the implementation of modern methods such as high density staging of inventory along with ergonomic work stations, Associated Grocers of New England will realize the benefits of a compact system footprint along with efficient and accurate order processing," explains Ken Ruehrdanz, manager of the distribution systems market for Dematic.