Walt Swietlik, of Rite-Hite, shares five of the newest and most effective lighting solutions on the market. 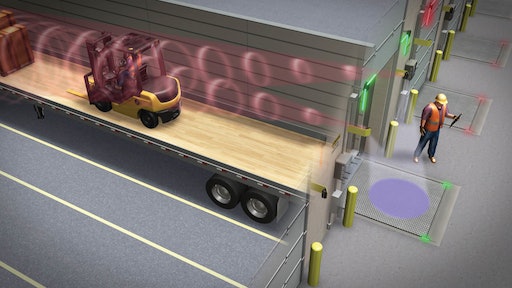 When you think about safety at the loading dock, lighting may not be your first thought. But innovative lighting solutions are some of your greatest tools in maintaining not only a safe environment, but a more efficient operation overall.

Food Logistics recently caught up with Walt Swietlik, director of Customer Relations and Sales Support at Rite-Hite, a leading manufacturer of material handling systems designed for maximum safety and productivity, who shared five of the newest and most effective lighting solutions on the market today.

Illuminating the inside of the trailer for proper loading and unloading is not a new concept. However, traditionally that was done with different types of incandescent bulbs and flood lights. Today, Swietlik says, the food industry has for the most part all converted to LED lighting, with more robust mounting fixtures to the building wall and arms to get the actual lighting into the trailer.

“Fortunately, we've been involved in illuminating the inside of trailers with LED lights for close to 10 years now, and if you studied anything about lights, you know that LED is certainly the wave of the future,” he says.

Some of the benefit to adopting LED lighting include its brightness, efficiency and durability.

LED lighting’s only negative attribute, however, is that sometimes it is too bright. “One challenge dock attendants complain about is that when backing out against the LED lights, the brightness makes it difficult to see,” Swietlik explains.

“The dock attendants have shown a very, very strong preference towards that type of equipment,” Swietlik adds.

Pedestrian safety is a top priority on the loading dock. But collisions between fork lifts and people are still a major problem. According to the National Institute for Occupational Safety and Health (NIOSH), close to 20 percent of all forklift accidents involve a pedestrian being struck by the forklift, translating to almost 19,000 people per year.

“Often the pedestrian is distracted or unaware of what's going on inside the trailer, and they walk by the dock door just as a forklift is backing out,” explains Swietlik. “We've had some rather serious injuries and some scary near-misses with lift truck versus pedestrian as you can imagine.”

The Pedestrian-Vu is a unique enhancement to their dock lock product that illuminates a blue light on the dock leveler any time there is equipment or people inside of trailers. Pedestrian-Vu also works in conjunction with Dok-Lok products to alert any dock worker or forklift that enters an unsecured trailer. The blue light flickers as an audible alarm alerts the unsuspecting dock worker that they’ve entered an unsecured trailer, while the external light system simultaneously changes to red, warning the truck driver that there is activity inside the trailer.

“The feedback from the market has been very strong and very positive on this enhancement, since the introduction in April,” Swietlik adds. “We've been talking about this pedestrian versus forklift scenario for probably the last six or seven years. We offer a number of different guard-railing products, but this lighting really seems to hit a note with the customers right now.”

In some cases, Swietlik explains, the control box that controls the dock lock on the inside of the building can be blocked by product loads that are being staged on the dock, thus blocking the green light, or the communication to the dock attendant that the dock is safe.

“We've added lighting around the dock door and dock leveler that replicates the light sequence on the inside control box, so when that inside light goes to green, we show that green light, not only on the control box, but around the overhead door, as well as at the base of the dock leveler,” he adds.

The same thing holds true when the dock lock is unlocked, and that light changes to red inside. That red light is on the control box, it's around the overhead door, and it's at the base of the dock leveler.

“This enhancement is very common sense, but they're very intuitive to the client and to the operator. They don't take a lot of training, but they go a long way in letting people know what's going on,” he adds.

Rite-Hite also recommends lighting on the outside of the building. Its innovative solution, called Approach-Vu, uses sensors to detect the motion of a tractor-trailer loading into a dock positon.

On the outside of the building, traditionally there is a red and a green light for the truck driver to help him back into the dock and know when the trailer is locked and when it's unlocked. But, Sweitlik says, a significant number of catastrophic injuries are documented as a result of trailers backing into people standing in the drive approach.

Using the dock lock enhancement, a visual and audible alarm located on the vehicle restraint alerts both dock workers and pedestrians in the drive approach of the impending danger. This multisensory alert system is particularly important because ambient noise often masks the sound of a cab’s noisy engine, which can be 70 feet or more from the back of the trailer.

“As we've investigated these accidents, what appears to happen is that the dock attendant is doing maintenance or cleaning or paperwork at the dock face, and with all the other noises and distractions, they're oblivious to that trailer backing in,” he explains. “By adding these lights and alarms right at the dock face, right where the dock locks, we significantly increase the awareness for the dock attendant when that trailer backs in, hopefully avoiding this problem of people getting crushed by backing trailers.”

Not specifically addressing loading dock safety, but important in many food and beverage operations, Rite Hite released a traffic light for warehouse intersections at ProMat in April, called the Safe-T-Signal. The product alerts material handling personnel of dangerous intersections, much like a traffic light does for motor vehicles.

The Safe-T-Signal is suspended from the ceiling, about 16 feet off the ground, at the center of an intersection. It has motion sensors (it can have up to four motion sensors for a four-way intersection) that as a pedestrian or a lift-truck driver approaches this device activate to send a yellow signal to the other three aisles that make up the intersection, indicating that there's something going on there, and they should slow down.

If someone is approaching the Safe-T-Signal from the aisle on the right, and another person happens to be approaching it from the aisle on the left, the light will give both of people a red signal, indicating they both should stop and figure out who's going to proceed first. It also will show yellow signals to the other two aisles, indicating they should slow down and see what is going on up ahead.

When a red stop alert is illuminated, a blue light also is shown on the floor as a redundant warning that something is going, and all parties should slow down.

“It's simple, it's intuitive, and all it requires is the client to plug it into a 110 outlet, and they're up and running,” explains Swietlik.

Dock Equipment Raises the Bar for Safety and Performance