Finding The Right Leveler For The Job 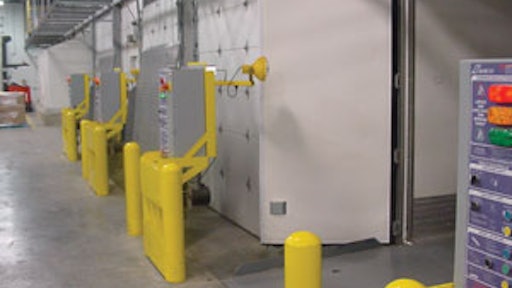 The loading dock is the central hub of activity for a warehouse. The efficient onloading and offloading of goods represents the life flow of a company and anything that impedes that activity or threatens to disrupt it is a threat to the company's well being.

The choice of an interface between delivery trucks and the dock itself is crucial. Failure to choose the best leveler for a dock application can jeopardize the safety of workers. It can lead to work stoppages and even damages to expensive equipment. Companies need to learn how to assess their docks; the product they are interacting with and what types of levelers will best suit their particular applications.

In addition, cleanliness is a major concern for food distributors and dock doors are a major thoroughfare for dirt and debris.

"One of the reasons that we ended up switching to vertical dock levelers in our facility is cleanliness," says Kirk Mortenson, director of real estate/facilities for Gordon Food Service, a Grand Rapids, MI-based foodservice distributor. Before switching to the vertical style of dock levelers, Gordon Food relied on mechanical pit levelers to bridge the gap between the dock and the delivery vehicle. However, the physical logistics of having pit levelers presented a number of challenges to the company.

"AIB (The American Institute of Baking) comes into our facilities frequently to make inspections," says Mortenson. "With the vertical levelers we are using, we actually have a pit that runs the length of the dock. It has steps doing down into it that make it easier for our people to clean out any dirt and debris that might collect in there and make sure its clean enough to pass health inspections."

He says the pit levelers were much harder to access for cleaning.

"Many companies are going with the vertical storing leveler all the way throughout their facilities, just because you get the advantage of cleanliness," agrees John Carroll, director of U.S. sales for 4Front Engineered Solutions. The Carrollton, TX-based company is a manufacturer of branded truck and rail loading dock equipment, including Serco vertical dock levelers.

"The levelers have a great impact on cleanliness at the dock. You don't have a hidden pit that you have with the pit style leveler that you can only access and clean from outside the building. With the vertical, everything is standing up. It's visible, it's there for cleaning. Wash down is easier."

Gordon Food service also moves a lot of refrigerated food through its dock doors as part of its food distribution business. The company had to find ways to help cut down on energy loss and preserve the temperature integrity of the food. Switching to the vertical dock levelers provided great benefits in that respect.

"With verticals, trailers typically back into the specially-designed loading dock bay before their doors are open," says Steve Greco, director, international sales and marketing, Blue Giant Equipment Corp., Ontario, Canada. "It makes for a complete seal between the trailer and the facility. Then the driver opens the doors inside the building and the vertical dock leveler is lowered into place inside the bed of the trailer."

"Imagine the driver having to open the doors in the parking lot, where it's 20 degrees inside and 105 degrees outside," says 4Front's Carroll. "The driver has to swing them back, lock them, walk 60 feet back to the cab and then back the truck the rest of the way to the loading dock."

In that time, a great deal of cold air can be lost. 4Front did a study recently that showed companies actually lose one ton of refrigerate air per dock door per year, on average, when they use pit levelers instead of vertical dock levelers. If a ton of refrigerated air costs a minimum of $400 to generate, that means on a 10 door facility a company is losing $4,000 a year on cold air going outside its doors--a significant expense.

"One of our customers--a major producer of poultry products--has a particular marinated chicken product which is so temperature sensitive that if the product rises a few degrees above the optimal temperature it spoils," says Carroll. "If you have a situation where a driver stops short to open his doors and it takes him two to three tries to get the truck perfectly lined up with the dock, the first few rows of that product could already be ruined."

In addition, the use of vertical dock levelers also maintains a tighter seal against rodent and insect infestation.

"They really do make for a much cleaner workplace," says Gordon Food's Mortenson.

Anderson-Dubois, Carnegie, PA, is the exclusive distributor for McDonalds in the tristate PA area, running from as far north as Erie, PA all the way through Ohio. The company ships 46 million cases of McDonald's products out of its facility every year and sees heavy duty traffic in and out of its dock doors.

"Because of the high traffic and the fact that we have very few dock doors for the amount of business that we do, we had an absolute need for heavy duty dock levelers," says Mark Latsko, distribution process manager for the company. "That's why we ended-up going with heavy duty electric and hydraulic levelers. The others didn't have the capacity that we needed.

One issue the company dealt with was receiving trailers of different size lengths, which meant it needed fairly long ramps. In addition, Anderson-Dubois has to use double pallet jacks in the loading and unloading process due to the amount of traffic they get. The ramps needed to be able to handle the added weight.

"Cross docking is becoming more complicated and has to be looked at more carefully as trailers become larger to accommodate bigger payloads and businesses operate three shifts due to demanding distribution requirements," notes Blue Giant's Greco. He says companies today need to give consideration to specifying heavier capacity dock levelers that will withstand the dynamic forces applied to it during load transitions.

"In addition, longer dock levelers can maintain the minimally required operating angles. These help prolong the life of the dock levelers, but also provide safer operating slopes for the forklifts to operate under," says Greco.

He suggests companies choose dock levelers that are designed with I-beam deck support, which provides the best structural support for demanding applications.

"From a safety and a reliability standpoint, the longer, heavy duty hydraulic and electric dock levelers that we're using here are of such dependability that they are becoming the mainstay throughout the McDonalds supply chain," says Latsko.

International Oceanic Enterprises is a wholesale seafood company located in Bayou La Batre, AL, which specializes in domestic shrimp. The company currently uses air dock levelers on its dock as a means of bridging the gap between the dock and delivery trucks. Prior to this, International was using truck actuated dock levelers.

"One bad thing about the truck actuated levelers is that you have to put a sign out front that says 'do not back up to the dock unless you speak to someone inside,' otherwise he could back up, activate it and ruin the leveler and damage the door," notes Dominic LaDolcetta, sales manger for International. "It's too much liability."

Another problem International had with its previous dock levelers was the salt brine on its frozen products.

"The dock levelers we had before had more mechanisms underneath like cams and because they were truck actuated levelers, the paint was being scraped off them as the trucks were pushing the heavy I-beams with the cams--it's difficult to get any kind of paint to stay on them."

The salt water run-off from the shrimp combined with the lack of paint on the levelers to cause a rust problem for the company.

Switching to the air actuated levelers eliminated this problem for International because there are fewer moving steel parts underneath the plates.

One of the reasons is that the air actuated levelers that International is using can be activated by workers from the inside, as opposed to being activated by the truck itself, which is inherently safer.

Companies in the market for dock levelers should keep a number of factors in mind that will impact on the safety, cleanliness and security of their docks.

He stresses that companies should factor dock design, load configuration, efficient cargo handling and material handling equipment requirements into their decisions to help minimize the interruption of materials flow at the dock as well as product damage. For example, they should make sure the leveler's width is adequate. If it is, an operator can drive straight in and out of the truck and won't have to worry about slowing down and turning around in the trailer.

Smoothing out the transition from the warehouse floor to the trailer is another big consideration, according to Rite Hite Corp.'s Joe Manone. He suggests companies look for dock levelers that have been designed with smooth hinges that minimize or remove the bumps that lift truck workers experience every time they go in and out of a delivery truck.

Another issue is productivity, which is affected by the amount of time it takes for a system to put a leveler in the bed of a trailer. Manone says hydraulic systems do this at the fastest rate, especially systems with dual controls that control both the deck and the lip. These can decrease the time to deployment by up to 30 percent, which can lessen congestion if there is constant traffic at the dock.