The national average spot van rate hit a record high of $2.46 per mile during the week ending Oct. 4 and the overall number of available loads increased 5% compared to the previous week as supply chain disruptions push freight to the spot market. 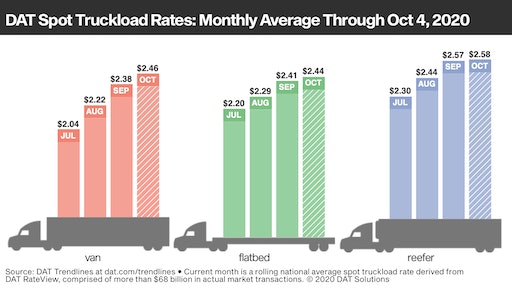 The national average spot van rate hit a record high of $2.46 per mile during the week ending Oct. 4 and the overall number of available loads increased 5% compared to the previous week as supply chain disruptions push freight to the spot market, according to DAT Freight & Analytics, which operates the industry’s largest load board network.

Available capacity slipped 1.5% week over week which helped send van, refrigerated, and flatbed load-to-truck ratios higher. Load-to-truck ratios represent the number of loads posted for every truck posted on DAT load boards and are a real-time indicator of demand for truckload services.

Van Trends: The average spot rate increased on 63 of DAT’s top 100 van lanes by volume compared to the previous week. Twenty-eight lanes were neutral and nine lanes saw rates decline. The number of available loads on the top 100 lanes increased 2.4% and, at $2.46 per mile, the national average spot van rate was 8 cents higher than the September average. The national average van load-to-truck ratio was 5.5, slightly above the 5.4 average for the month.

Los Angeles was the nation’s busiest market for outbound spot van freight and the average spot rate was $3.37 a mile, up 7 cents week over week. Containerized cargo volumes are moving through the ports of Los Angeles and Long Beach at record levels: total container volume at Los Angeles topped 960,000 TEU in August, an all-time high and more than double the volume moved in March. The port said there were no cancelations on its liner services in September.

Flatbed Trends: The average spot rate increased on 41 of DAT’s top 78 flatbed lanes by volume compared to the previous week, 26 lanes were neutral, and 11 lanes fell. The number of available loads on the top 78 lanes increased 2.2%.

Regionally, outbound load volumes from the Pacific Northwest are up 17% week over week with 18% of those loads destined for Southern California. Rates from Cleveland are now 10 cents higher over the past two weeks at $2.70 a mile. Cleveland to Roanoke, Va., was up 7.7% while Cleveland to Milwaukee increased 7.0%

Reefer Trends: The reefer rate rally has extended two months longer than usual this year. At $2.57 a mile, the national average spot reefer rate for September is 20% higher compared to September 2019 and has been above the average contract reefer rate since August.

There are signs of a plateau. The average spot rate was lower on 28 of DAT’s top 72 reefer lanes by volume compared to the previous week; 23 lanes were up and 20 were unchanged. The national average outbound rate from Los Angeles, the highest-volume market for reefer freight last week, slipped 3 cents to $3.66 per mile. Atlanta declined 5 cents to $2.95 a mile.