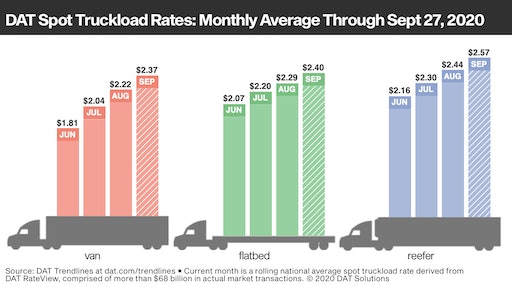 The number of loads posted to the DAT One load board network was unchanged compared to the previous week and the number of available trucks fell 2.6%. While spot rates remain elevated, the pace of price increase over the past five months has tapered in recent weeks.

These rates are rolling averages for the month through Sept. 27 and include a fuel surcharge.

Shippers shift freight to the spot market: Supply chains have been leaning on the spot market this year. According to data from DAT’s Freight Market Intelligence Consortium, 80% more freight moved on the spot market in August compared to 2019, but overall freight volumes were down slightly. FMIC data is based on more than $50 billion in actual annual freight transactions supplied by FMIC members, which include major retailers, wholesalers, manufacturers, third-party logistics firms, and other organizations.

Van demand remains high: The national average van load-to-truck ratio was 5.3, virtually unchanged from the previous week but equal to the August average, the all-time high for this time of year.

Load board volume was 22% higher in Florida and Gulf Coast markets as freight patterns return to normal after a period of disruptive weather. In California, volumes in Ontario and Los Angeles posted a 16% week-over-week increase, while San Francisco volumes climbed 18%. Houston reported the largest gain among major van markets with a 30% increase in outbound load posts.

Average rates jumped on key lanes for retail freight including from Philadelphia to regional warehouse markets:

- Philadelphia to Columbus climbed 9 cents to $2.25

Reefer prices soften regionally: At $2.57 per mile, the national average reefer rate is at its highest level in the last five years for September. The number of lanes with higher average rates versus lower rates compared to the previous week was evenly split.

Spot reefer rates tend to fall at this time of year as volumes of fresh produce decline. The average outbound rate from Philadelphia, a major produce distribution hub, is down 11% month over month. Avocados in south Florida are in peak season and load posts out of Lakeland and Miami, Fla., are up 8% week over week, although rates out of Florida are typically soft.

Produce volumes are building in West Coast markets and particularly in southern Idaho, where rates on major outbound lanes increased week over week. The average spot reefer rate from Twin Falls to Los Angeles and Twin Falls to Chicago both averaged $2.27 per mile last week.