A West Coast customs broker said that her customers are being assessed as much as $300 a day for containers that sit too long on the docks, though the containers are trapped there. 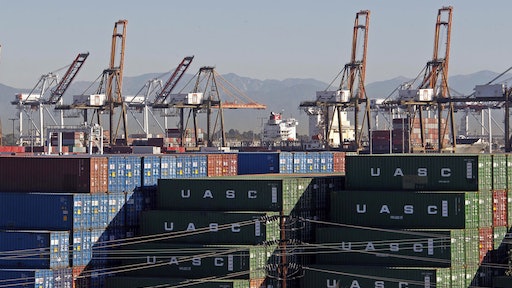 As employers at the ports along the West Coast on Monday refused to unload ships for the sixth day out of the past 10, their nine-month contract dispute with port workers is becoming a significant business problem, according to The Wall Street Journal.

Maersk Line has canceled some sailings, while China Ocean Shipping (Group) Co. said it will skip at least one port. Truckers that normally haul an average of five containers a day away from the Port of Oakland, Calif., are lucky to haul one. A West Coast customs broker said that her customers are being assessed as much as $300 a day for containers that sit too long on the docks, though the containers are trapped there.

The delays are causing acute distress to small-business owners with limited inventory to cover sales.

The Agriculture Transportation Coalition estimates that port delays and congestion have reduced U.S. agricultural exports by $1.75 billion a month, while the North American Meat Institute put losses to U.S. meat and poultry producers at more than $85 million a week, including hides and skins.