Our most view content in 2022 gives insight into the topics weighing heavy on the industry including the container market, ELD mandates and what new innovation are being leveraged today. 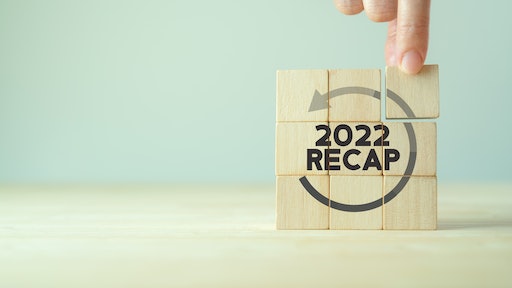 As we wrap up 2022, we can’t give the year a proper send off without a look back at some of the heavy hitting topics written about, shared and discussed. This year has been one of ups and downs that will most likely continue well into 2023 and beyond, but with a little focus on transportation and technology we might be able to prepare a better than years past.

An Oversupply of Containers

Food Logistics’ most viewed article this year published in July. Back then, we reported on how freight rates had come down 20% on average since January. According to Container xChange, this was due to an oversupply of containers that led to second-hand container market prices lowering. Though to much chagrin, a rise on inflation set to build stress on the economy and ultimately negated a massive decrease, due to the lingering disruptions on the supply chain.

“The current situation of oversupply of containers is a result of a series of reactionary market disruptions that began soon after the outbreak of the pandemic in early 2020. With the rise in demand, congestion at ports increased and the container capacity was held up for a considerably long period of time. This led to the panic ordering of new boxes at record levels. With time, as markets reopen and demand softens, the oversupply is a natural outcome of demand-supply forces balancing at new levels,” says Christian Roeloffs, co-founder and CEO of Container xChange. “The oversupply situation does not come as a surprise because the average container prices and leasing rates have been declining globally since Sept-Oct 2021.”

With data published by Drewry indicating an excess of 6 million TUEs of capacity in the global fleet of containers, Container xChange analysis states that the oversupply will lead to the requirement of more depot space, which is already scarce — something to note as we flow into 2023.

The Latest & Greatest in ELD Mandates

For years now the implementation of ELDs from FMCSA regulations has been on the move. As time has evolved and adapted, updates to these mandates have been made and resulted in change. In August, Shaman Ahuja, senior director and head of Axele, outlined the most recent updates in an article, describing that the “goal of the ELD mandates is to record hours of service for drivers as a way to make truck driving safer. ELDs connect to a truck’s engine and automatically record driving activity and update the driver’s log. Data that is collected includes date, time, location, engine hours, mileage, speed, hard-braking, available hours and more.”

It was reported then that the most cited ELD violations were failing to maintain paperwork and device inability to transfer data when requested by an inspecting officer, violations that hold fines upwards of $10,000. The latter being of major importance in the future of ELDs, as 3G cellular networks began phasing out at the beginning of the year and is set to completely dissipate by January 1, 2023. As this mandate change comes to its end, look for more evolution in the near future, as data continues to grow and ELD requirements look for companies to grow the devices as well.

Last, but certainly not least, innovation took center stage with an article by Andrew Sobko, CEO of CDL 1000, regarding consumer demands and the role technology plays in meeting them. Data from the National Retail Federation forecasts a total of 26 million containers imported by the end of the year, stuck at ports and becoming an ongoing crisis.

“One example of how logistics companies can apply new thinking to help clear the congested ports is the containers can be loaded on open-deck trailers, which cuts out the variability of transit time via railway options. Estimated transit time can be cut in half when expedited in this manner. It is a bit risky, but “with great risk comes great reward,” and cowboying up is necessary to keep the country’s supply chain moving. The cold chain faces the same challenges as the ports – without staff or enough equipment, goods are delayed”, says Sobko.

As Sobko concludes, “Some solutions involve data, improved analytics and digital synergies. But at the helm of any high-tech dashboard is still a logistics operator and at the wheel of any truck is still a shipper moving goods. Marrying the opportunities new technology provides with the skills and industry understanding of the boots on the ground is one important way forward.” And this testament reigns true hereafter.

A new year brings on new resolutions, and that includes in the cold food chain. Keeping a watchful eye on shipping strategy, safety in trucking and new emerging technologies that answer the call for supplier challenges are great assets to bring into 2023 for a transformative and productive year.

Staying Competitive in the Race for Last Mile in Grocery

The Demand for Delivery is Diminishing as Food Prices Skyrocket