The $44 million award, made possible through the Nationally Significant Freight and Highway Projects (NSFHP) Program, is a significant portion of a total $128 million project known as the Port of Savannah International Multi-modal Connector. 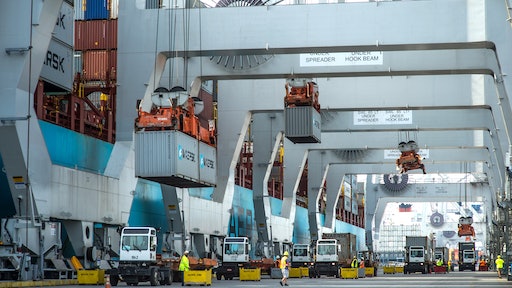 Currently, 18 percent of the containers handled at Garden City Terminal (above) moves on Class I railroads Norfolk Southern and CSX.

The Georgia Port Authority has received a $44 million Fixing America's Surface Transportation (FAST) grant from the U.S. Department of Transportation to increase rail capacity at the Port of Savannah.

The $44 million award, made possible through the Nationally Significant Freight and Highway Projects (NSFHP) Program, is a significant portion of a total $128 million project known as the Port of Savannah International Multi-modal Connector. The project is expected to take five years to complete.

Currently, 18 percent of the containers handled at Garden City Terminal moves on Class I railroads Norfolk Southern and CSX. The Port of Savannah handled 3.73 million twenty-foot equivalent container units in 2015.

"I would like to thank the Georgia Congressional delegation, including Congressmen Buddy Carter and Rob Woodall, and Senators Johnny Isakson and David Perdue, for their dedicated support of this program," said GPA Executive Director Griff Lynch. "As the nation's fourth busiest container port, Savannah's continued rail expansion is a key component to freight mobility in this country.  This transformative project will not only increase rail capacity and velocity at the Garden City Container Terminal, but will also provide substantial benefits to surrounding communities by improving public safety, reducing environmental impacts and avoiding commuter traffic."

"Investments such as this and the related inland rail facilities throughout Georgia will help shift more containers from truck to rail, allowing greater efficiency and reduced highway congestion," GPA Board Chairman Jimmy Allgood said. "Rail cargo will play an important role in our future, not only increasing our capacity, but opening up new markets for Georgia's ports. Gov. Nathan Deal has also announced a $10 billion freight mobility plan to be carried out over the next 10 years, which will improve the capacity and fluidity of transportation infrastructure across the state,"

"The announcement today is great and well-deserved news. I was pleased to support the FAST Act last year because the Port of Savannah and other projects around the state deserve the stability of a long-term plan from the federal government for transportation infrastructure improvements," said Rep. Buddy Carter. "As part of the FAST Act, the FASTLANE program prioritizes federal spending on critical transportation projects necessary to the nation's security and economic success, which makes the Port of the Savannah the perfect recipient of this funding. The Port is essential for jobs and economic growth in the First District, the Southeast, and the entire nation. This important funding will assist in increasing this economic success and work to improve rail capacity, reduce congestion around the ports, improve highway safety, and strengthen job opportunities."

"We knew going in that the FAST Act needed to be legislation that would reform how we go about prioritizing and spending money maintaining and expanding America's infrastructure, and in turn, start earning back America's trust in how we use their hard-earned tax dollars," said Rep. Rob Woodall.  "This grant, and others in FASTLANE, is a wonderful example of that effort taking shape.  The Port of Savannah is one of the busiest ports in the country, which makes it the perfect candidate for what this program is intended to do: steer taxpayer dollars toward projects that matter most to America.  Whether it's ensuring the safety of workers and nearby residents, clearing traffic congestion to get folks home to their families sooner, or making sure we have the necessary infrastructure to create Georgia jobs, this is exactly the kind of nationally significant project that will benefit Georgia families and our nation's economy."

"Last year, I was proud to support the FAST Act because Georgia needs a long-term plan from the federal government to support urgently needed transportation infrastructure improvements," said U.S. Senator Johnny Isakson, R-Ga. "I am pleased to see the newly created FASTLANE program already paying off for Georgia with this critical funding to help improve rail capacity, reduce traffic and commuter delays on roadways, enhance economic competiveness of the Savannah port and increase Georgia farmers' and manufacturers' access to foreign markets. Local commuters and businesses in the Savannah area will also benefit greatly from the enhanced movement of maritime cargo and improved flood control. Furthermore, this project will create both immediate and long-term jobs, while increasing economic development, and critical safety and environmental improvements."

"The Port of Savannah is the fastest-growing port in the country and plays a vital role in expanding trade in the Southeast and around the world," said Sen. David Perdue. "Moving forward, the Savannah Port needs to increase and improve infrastructure surrounding the port. With the deepening of the Panama Canal it is critical that there are adequate transportation corridors around the Port of Savannah to accommodate increased activity."