The TraPac LLC’s Los Angeles terminal offers a window on how global trade will move in the near future: using highly automated systems and machinery, with minimal human intervention, to handle the flood of goods. 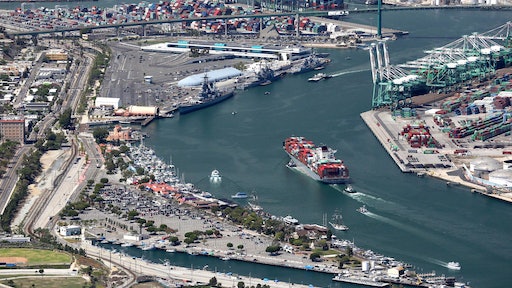 The TraPac LLC’s Los Angeles terminal offers a window on how global trade will move in the near future: using highly automated systems and machinery, with minimal human intervention, to handle the flood of goods that new free-trade agreements will push to the docks, according to The Wall Street Journal.

The TraPac site is one of only four cargo terminals in the U.S. using the technology. That is fewer automated terminals than there are at the Port of Rotterdam in the Netherlands alone.

Many in the industry believe automation, which boosts terminal productivity and reliability while cutting labor costs, is critical to the ability of ports to cope with the surging trade volumes and the huge megaships that are beginning to arrive in the U.S. Analysts estimate the technology can reduce the amount of time ships spend in port and improve productivity by as much as 30 percent.

Supporters of robotic cargo handling are also getting a new showcase this month with the phased-in opening of an automated terminal at the Port of Long Beach, next door to the Los Angeles port. At a cost of over $1 billion to complete and the capacity to handle 3.3 million 20-foot container units—nearly half of the entire port’s volume last year—the Orient Overseas (International) Ltd. site is a big bet on the future.

The transportation and logistics aspects of any food supply chain are among the most critical functions for supporting and enhancing food safety.
Ryder System, Inc.
April 29, 2020
Latest

In order to meet the ambitious objectives of increasing performance throughout their supply chain, from supplier orders to delivery to stores, Intermarché and Netto tapped Symphony RetailAI.
Symphony RetailAI
September 23, 2020

The key to differentiating in this moment lies in how QSRs are leveraging their mobile technology to keep their lines moving and their customers safe.
Dipesh Hinduja
September 23, 2020

Along with International Food Trendologist, Liz Moskow, Spoonshot created the list to predict and interpret the food trends that will impact menus, product development, and consumer behavior into 2021.
September 22, 2020