Since the Wendy’s Boycott was announced in March, tens of thousands have taken up the charge in the form of institutional endorsements and actions in local communities around the country. 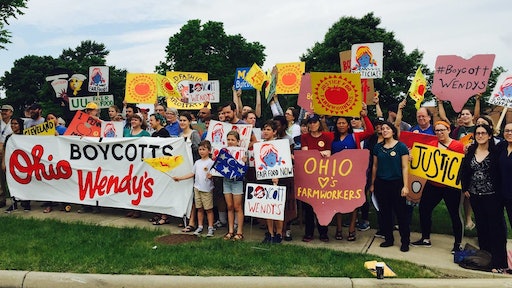 Allies from cities around the Midwest – Cleveland, Cincinnati, Pittsburgh, Ann Arbor, Nashville and Louisville – traveled to Wendy's headquarters for the shareholder meeting.

Last Thursday, the Fair Food Nation delivered the message of the Wendy’s boycott loud and clear to Wendy’s corporate headquarters in the quiet, suburban town of Dublin, Ohio. Farmworker leaders led a delegation inside the meeting and a lively action outside, joined by scores of people of faith, students and community leaders from around the Midwest.

Since the Wendy’s Boycott was announced in March, tens of thousands have taken up the charge in the form of institutional endorsements and actions in local communities around the country. This commitment and enthusiasm took center stage both inside and outside the meeting, making it clear to Wendy’s executives and shareholders that the boycott will only grow in numbers and strength the longer they hold out.

In the days leading up to the much-anticipated meeting, hundreds of people answered an invitation to participate in the National Day of Prayer, calling the offices of Wendy’s board chairman and major shareholder Nelson Peltz. Fair Food supporters across the country called Peltz to deliver the message that people find it unconscionable that Wendy’s refuses to join the Fair Food Program – and as a result, they are boycotting Wendy’s.

A national call-in day followed last Wednesday, and hundreds more picked up their phones to call Todd Penegor, the new CEO of Wendy’s. Many callers reported that they were unable to get through due to the sheer volume of calls, making it evident that support for the boycott is thriving. The deluge of calls from people of faith around the country was accompanied by the publication of a letter from 40+ Columbus-area clergy demanding that Wendy’s participate in the Program and pledging to boycott until they do.

Allies from cities around the Midwest – Cleveland, Cincinnati, Pittsburgh, Ann Arbor, Nashville and Louisville – traveled to Wendy's headquarters for the shareholder meeting.

Early on Thursday morning, as a few dozen shareholders entered the headquarter building to hear about and vote on corporate initiatives, members of the CIW were joined by over 80 people from the Columbus area and across the Midwest to communicate the message of the Wendy’s boycott right outside Wendy’s doorstep.