Data-centric companies with Silicon Valley pedigrees, like 2 1/2-year-old Granular and aerial surveillance startup DroneDeploy, that have the ability to tap into all this machinery and run farms as efficiently as Google runs its data centers. 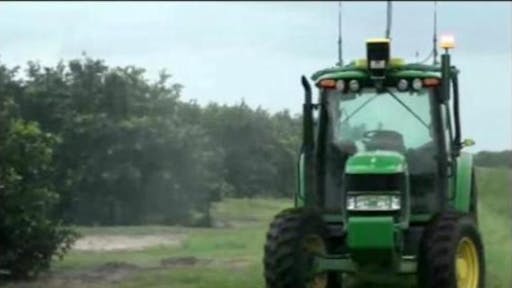 John Deere has been selling self-driving tractors for 15 years.

America farmers are turning to data technology in a big way – including self-driving tractors and data-monitoring drones – to improve productivity, according to The Wall Street Journal.

John Deere and its competitors aren’t just turning out tractors, combines and trucks that can drive themselves and even each other, automatically coalescing into tight formations as they cross a farmer’s field, like fighter jets at an air show, they are also turning out wirelessly connected sensors that map every field, as well as planting and spraying machines that can variably apply seed and nutrients to a field, as if they were 20-ton print heads for 3D printers.

Unlike most other areas of technology, this is happening today. John Deere has been selling self-driving tractors for 15 years. What’s new is data-centric companies with Silicon Valley pedigrees, like 2 1/2-year-old Granular and aerial surveillance startup DroneDeploy, that have the ability to tap into all this machinery and run farms as efficiently as Google runs its data centers.

The farm sector is one of the leading adopters of data technology. That fact is not evident to many since the media doesn’t focus on farms as much as it does on consumer technology. But the farm is going high tech at a rapid pace. This Wall Street Journal article notes the cab of existing self-driving tractors resembles the cockpit of a passenger jet.

As more farms embrace this technology, U.S. agricultural production will increase in response to a growing global middle class. The demand for food supply chain services will rise in tandem with increased food production. The technologies that are improving farm efficiencies impact the entire food supply chain.

Despite decades of heavy industrial and technological development, agriculture remains a major part of the U.S. economy and 40 percent of the country’s land is used for farming. While only a minority of the population lives on farms, the U.S. remains the world’s largest exporter of grain.

The August issue of Food Logistics examines how Big Data is empowering the food supply chain. By Elliot Maras 8-10-15