The 2016 report card highlights a growing discrepancy between consumer demand and good food policy out of Washington. 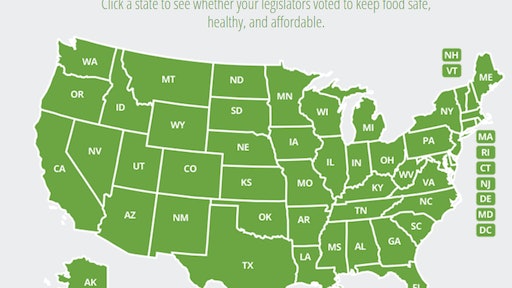 Founded in 2012, Food Policy Action is the first national organization to publish an annual scorecard that grades lawmakers on Congressional food policy votes. An advisory council of food policy experts picks which votes and bills are relevant and should be scored.

The Food Policy Action has released its National Food Policy Scorecard for the 114th Congress, the 5th annual Congressional Scorecard released by the organization to educate the public about votes taken by Congress on critically important food issues. While there was some headway on the passage of good food policies - and scores overall increased by 6 points since the 113th Congress – Washington is still falling short, showing little progress on major food policy in the last two years.

“This year’s Scorecard shows that Congress owes the American public much better leadership on these issues,” said FPA co-founder, food advocate, and chef Tom Colicchio. “Food is connected to every critical issue facing our nation - everything from our health, economy, and immigration, to labor and the environment. These issues matter to Republicans, Democrats, and independents. How Members of Congress vote on related policies has a tremendous impact on our food system. Members of Congress regularly vote on policies that affect the safety, security, and nutrition of our food supply. And yet, there has been very little attention to bringing transparency and accountability to that discussion. Food Policy Action was created for exactly this purpose – to hold Members of Congress accountable for the votes they cast that impact food and our very out-of-balance food system. FPA will continue to stand on the side of voters. Our 5-year mark is showing Congress that we’re not going away, and that we will continue to arm the public with information to hold their elected officials accountable for their food policy record.”

The Senate was graded on 10 votes and 12 bills, and the House on 16 votes and 15 bills. This year, 82 Members of Congress – 79 in the House of Representatives and 3 in the Senate – received perfect scores of 100 percent, while three Members received 12 percent, the lowest possible mathematical score for this year’s scorecard. The overall scores averaged 57% across both chambers, up from 51% for the 113th Congress.

The Senate had higher average grades than the House, reflecting the three food-related unanimous consent votes which all Senators supported, including the reauthorization of the Older American Act that provides support for senior nutrition programs like Meals on Wheels. Additionally, we applaud both chambers for passing the Illegal, Unreported, and Unregulated Fishing Enforcement Act and the Global Food Security Act, demonstrating that even in a partisan environment, there is room for common ground on food issues.

Despite the modest bi-partisan gains in the 114th Congress, the 2016 Scorecard illustrates a Congress that has so far failed to act on major food policy reforms, including reauthorizing childhood nutrition programs, curbing the overuse of antibiotics in animal agriculture, and mandatory on-pack labeling of GMOs, among other disappointments. Additionally, many of the votes that were considered do not represent what the American public is demanding. These types of bills - that prevent transparency for consumers, roll back clean water and food safety protections, and block basic worker protection standards for farmworkers – do just the opposite. Rather than fixing our out of balance food system, they forestall progress and set exactly the wrong priorities of partisanship and corporate coffers over market signals of consumers and the health and safety of American families.

“The American consumer is making abundantly clear what they want on these issues,” said Ken Cook, Food Policy Action co-founder, board chairman, and EWG President. “We are seeing increased demand in the marketplace for food that is healthy, affordable, fair to workers, good for the environment and keeps farmers on the land. It’s time for Congress to step up and bring forward the good food policy that the public is demanding.”