With 85 percent of imports and exports moving through just 25 port complexes, traffic-clogged roads and other delays in a handful of cities can lead to major costs for producers and consumers nationwide, researchers at the Brookings Institution. 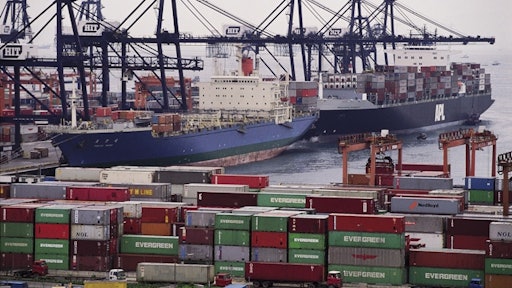 The Brookings Report calls for targeted investments by the Harbor Maintenance Trust Fund, which every port pays into, to the ports that need infrastructure improvements the most.

The U.S. government needs to adopt a national policy to address congestion at major ports, the Brookings Institution said in a new report, according to The Wall Street Journal.

With 85 percent of imports and exports moving through just 25 port complexes, traffic-clogged roads and other delays in a handful of cities can lead to major costs for producers and consumers nationwide, researchers at the think tank said. Goods moving through ports travel over 1,000 miles to reach their destination on average, Brookings found.

The data set analyzed in the report, published Tuesday, was developed from 2010 freight data, the latest available.

As it stands, policymakers see ports more as local infrastructure and not national assets, the Brookings report said. That means spending is allocated based on local needs, even though congestion near the ports of Houston or Portland can affect farmers as far away as Nebraska, said Adie Tomer, an associate fellow with Brookings and co-author of the study.

“The federal government really needs to have a national freight policy that helps everyone gets their goods to market, domestic or international,” Tomer said.

Mark McHargue, vice president of the Nebraska Farm Bureau, said he supports greater investment in ports even though he raises pigs and grows soybeans far from any coast. He said he exports about 27 percent of the pork he produces and half his soybean crop, and that delays strain his relationship with buyers abroad.

“We just have to have ports that function very well, and I don’t think we’ve invested enough, ”McHargue said.

The Brookings Report calls for targeted investments by the Harbor Maintenance Trust Fund, which every port pays into, to the ports that need infrastructure improvements the most. Customs, border protection and transportation links between ports and major metro areas are among the categories where smarter spending is needed, Brookings said.