The extremely fast speed at which chickens are slaughtered greatly increases the possibility of equipment jamming in processing plants, and makes it impossible to handle the birds in a humane fashion and creates safety concerns for Tyson Foods employees. 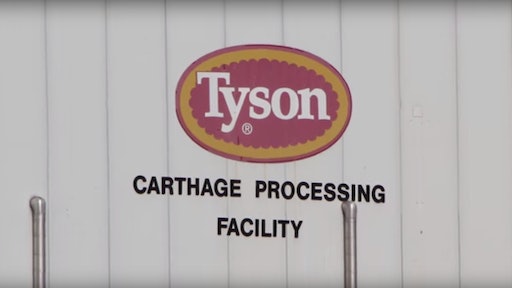 The Animal Legal Defense Fund released undercover video footage documenting a system that exploits both workers and animals from inside a Tyson Foods, Inc. Texas slaughter plant in Carthage, Texas.

The Animal Legal Defense Fund released undercover video footage documenting a system that exploits both workers and animals from inside a Tyson Foods, Inc. Texas slaughter plant in Carthage, Texas. The videotape includes an interview with the undercover investigator, filmed in shadow to protect her identity. This is the second undercover investigation to come out against Tyson Foods in as many months. In July, Mercy For Animals released uncovered footage from a farm contracted by Tyson Foods.

“Our investigation proves that the cruel treatment of chickens by Tyson Foods are not isolated incidents, but a systematic, companywide problem,” says Stephen Wells, Animal Legal Defense Fund executive director. “Tyson Foods is putting profits over not only ethical standards, but state and federal laws,” adds Wells.

The extremely fast speed at which chickens are slaughtered greatly increases the possibility of equipment jamming in processing plants, and makes it impossible to handle the birds in a humane fashion and creates safety concerns for Tyson Foods employees.

ALDF is asking the Attorney General of the State of Delaware, where Tyson Foods is incorporated, to investigate and sanction the company.

Second, Animal Legal Defense Fund filed a complaint with the Occupational Safety and Health Administration (OSHA) citing unsafe working conditions for employees, including repetitive motion stress injuries and the high risk of being maimed and/or injured by the rapidly moving conveyor belts. Tyson’s expectations of line speeds—140 chickens per minute—and number of birds processed per day up to 250,000—are unrealistic to physically meet, leading workers to putting quotas ahead of animal welfare, food safety regulations, and their own personal safety.

Third, ALDF filed a complaint with the U.S. Securities and Exchange Commission (SEC), accusing Tyson Foods of overstating the priority it puts on animal welfare in corporate and investor materials. The complaint contends that Tyson Foods is well aware of the working conditions in its plants, as well as of blatant violations of welfare regulations covering poultry processing.

Animal Legal Defense Fund urges Tyson Foods to immediately decrease the speed at which chickens are slaughtered allowing time for each animal to be treated humanely and eliminating pile ups and jams in machinery that cause extreme suffering. And to set a date and commitment to begin controlled atmosphere stunning, which uses carbon dioxide or a blend of gases to cause the birds to lose consciousness before they are hung on the processing racks.

“We’re giving Tyson Foods an opportunity to be an industry leader in the humane treatment of chickens. These changes would ensure chickens are not being tortured when killed and protect their employees from injury,” says Wells.

The interview with the undercover investigator and video footage is available to view at www.aldf.org/Tyson.

The raw undercover video footage is available for download upon request.