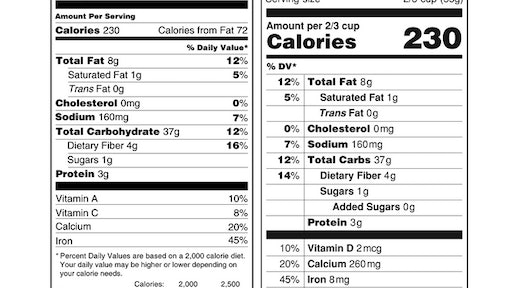 The 2015 Dietary Guidelines Advisory Committee (DGAC) recently summarized scientific data related to added sugars. The FDA considered the scientific evidence that the DGAC used, which showed that it is difficult to meet nutrient needs while staying within calorie requirements if one exceeds 10 percent of total calories from added sugar, and has determined that this information supports this daily value for added sugars. The DGAC also recommended that Americans limit their added sugars intake to less than 10 percent of total calories; this and other recommendations from the DGAC, which is an independent advisory committee, will be considered in the development of the final 2015 Dietary Guidelines.

The FDA’s initial proposal to include the amount of added sugars on the Nutrition Facts label is now further supported by newly reviewed studies suggesting healthy dietary patterns, including lower amounts of sugar-sweetened foods and beverages, are strongly associated with a reduced risk of cardiovascular disease. When sugars are added to foods and beverages to sweeten them, they add calories without providing additional nutrients.

“The FDA has a responsibility to give consumers the information they need to make informed dietary decisions for themselves and their families,” said Susan Mayne, Ph.D., director of the FDA’s Center for Food Safety and Applied Nutrition. “For the past decade, consumers have been advised to reduce their intake of added sugars, and the proposed percent daily value for added sugars on the Nutrition Facts label is intended to help consumers follow that advice.”

*The percent daily value (%DV) tells you how much a nutrient in a serving of food contributes to a daily diet. 2,000 calories a day is used for general nutrition advice.