Both speakers focused much of their attention on the sanitary transportation of food (STF) proposed rule, which is scheduled to be published in final form in March 2016. 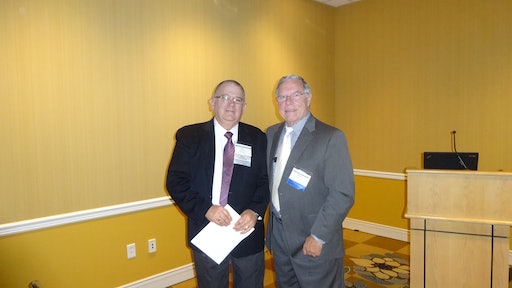 The Food Safety Modernization Act (FSMA) has been designed to improve the safe handling of food in the supply chain, but the law as it is written could have many unforeseen consequences. A session titled “Shipper, Carrier Receiver: Prepare for FSMA and Transportation Guidelines” gave attendees at this week’s International Association of Refrigerated Warehouses (IARW) – World Food Logistics Organization (WFLO) convention and expo in Orlando, Fla. a chance to hear from two experts who have been studying the proposed law.

Bud Rodowick, Thermo King’s manager of strategic relations for food safety and OEMs, and Patrick Brecht, Ph.D., president of P.E.B. Commodities, Inc. and a member of the WFLO Scientific Advisory Council, presented a number of concerns they have about the law during their joint presentation.

Rodowick, speaking first, said that the presentation was the most significant session at the IARW/WFLO show given the seriousness of the topic. He and Brecht both said many shippers are unaware of what’s in store for them once the FSMA law becomes effective.

Both speakers focused much of their attention on the sanitary transportation of food (STF) proposed rule, which is scheduled to be published in final form in March 2016.

“This rule concerns me the most,” said Rodowick, regarding the sanitary transportation rule. He said the FDA is not aware of how to address many of the carriers’ concerns associated with this proposed rule.

A big concern that both speakers addressed is how the STF rule defines “shipper.” According to the law, that person is expected to be knowledgeable about all factors concerning the food, such as packaging and holding temperature requirements relevant to sanitary transport.

Another area of concern for Rodowick is the section on keeping the trailer clean. Under the law, the shipper must specify to the carrier, in writing, all necessary sanitation requirements for the carrier’s vehicle and transportation equipment. Rodowick said the law does not define clean trailer standards. How does the shipper determine clean trailer standards given that the FDA’s STF proposed rule suggests that cleaning standards would similarly apply sanitary maintenance requirements in food plants to food transportation vehicles and equipment, he asked.

Temperature control requirements for food in transit is another area of concern.

“Before a shipper’s product is loaded into a refrigerated trailer, will a shipper document that the “pulp temperature’ of their product is the same as the ‘set point temperature’ they directed the carrier to maintain during transit?” Rodowick asked.

Rodowick said it would be impossible for a carrier to outline a driver training program without having the shipper’s specs for cleaning, sanitizing, temperature requirements, and inspecting vehicles and transportation equipment as required by the STF proposed rule. The FDA would require that carriers provide training to personnel engaged in transportation operations that provide an awareness of potential food safety problems that may occur during food transportation. Would one assume that those training requirements could also apply to warehouse personnel who load trailers, he asked.

The pre-cooling requirement is another area of concern. Under the law, a carrier must precool each mechanically refrigerated freezer and cold storage compartment as specified by the shipper. The rule would require the shipper to conduct a pre-loading verification of a vehicle's or shipping container's pre-cooling to ensure that food is not transported under conditions that may render the food adulterated.

He also noted that the law does not clarify how a shipper is to determine if a load is adulterated.

The law does not make clear how a carrier is supposed to provide temperature control documents to a shipper or a receiver, Rodowick said. Under the rule, a must, once the transportation operation is complete, demonstrate to the shipper and if requested, to the receiver, that it has maintained temperature conditions during the transportation operation consistent with those specified by the shipper. Such demonstration may be accomplished “by any appropriate means agreeable to the carrier and shipper” such as the carrier presenting printouts of a time/temperature recording device or a log of temperature measurements taken at various times during the shipment.

He said the FDA assumes the shipper has a lot more control over the carrier than they actually have. “It is unrealistic and inaccurate to assume that ‘shippers’ always control the transportation of the food and specify the carriage conditions,” he said.

Industry practice contractually defines and allocates roles and responsibilities to the party for whom it makes the most sense to be responsible (for example, most produce is shipped FOB (freight on board), Brecht said.

While the law has not been finalized, Brecht said carriers should be proactive and identify risks and critical control points with the “shipper” prior to finalizing agreements/contracts & starting shipments.

Agreements, accountabilities and requirements between the “shipper” or “responsible party” and the “carrier” should be achievable and consistent with the specified food safety regulations and implied tasks, he added.

Brecht said the FDA places a lot of emphasis on training. “A whole array of people need to be educated about what’s expected,” he said.

Given the law’s record keeping requirements, it will be difficult for drivers with limited computer skills to handle some of the tasks they are often assigned. Hence, he said carriers will have to limit driver intervention and decision making.

Brecht echoed some of Rodowick’s concerns about pre-cooling, defining a clean trailer, how a carrier provides documentation to a shipper, and temperature control requirements.

The implication of the proposed rule is that if a minor temperature deviation occurs and violates the rule, the food in that shipment is “adulterated,” rendering it unsuitable for any purpose, Brecht said.

Minor changes in the cold chain do not mean that a food is unsafe for human or animal consumption.

“It is my point of view that decisions to render a wholesome food “adulterated” based solely on recorded air temperatures will result in millions of dollars of unwarranted food loses annually,” Brecht said.