WHO is the directing and coordinating authority for health within the U.N. system and WFP is the world's largest humanitarian agency fighting hunger worldwide. 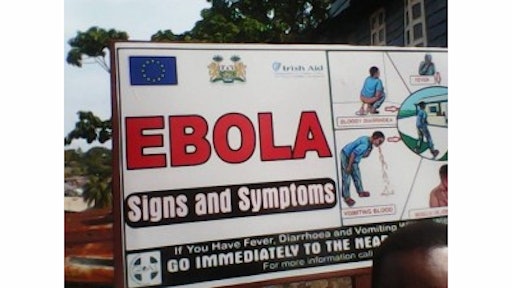 The United Nations World Health Organization (WHO) and the World Food Program (WFP) are combining their expertise in public health and logistics in a new partnership to bring the Ebola outbreak down to zero in West Africa.

“This partnership increases both agencies’ abilities to reach, monitor and respond to the needs of all people touched by Ebola,” which has affected some 24,000 people with nearly 10,000 deaths, WHO Director-General Margaret Chan said in an announcement.

“It helps us deploy and maintain technical teams with expertise in infection prevention and control, epidemiology, and contact tracing, enabling dedicated health workers in the deep field to do their best work,” according to Dr. Chan. “The partnership is also a learning opportunity for the future, informing our capacities to launch joint operations during large-scale emergencies.”

“Over the past seven months, partnerships have been crucial in fighting this devastating outbreak,” said WFP Executive Director Ertharin Cousin. “WFP has worked with our partners to respond to communities’ most basic needs – making sure food is reaching everywhere that the Ebola virus has hit.”

Cousin said her agency’s logistical support to WHO and the wider humanitarian community has enabled affected people to receive the urgent care and support they need.

“We are making progress, however we must remain vigilant,” Cousin said. “The Ebola crisis will not end until we identify, reach and successfully treat every last case. Recognizing this goal, the WHO-WFP partnership – a joint technical and operational force – will continue providing the support required to achieve zero cases.”

The two agencies agreed to combine their expertise in joint operations in more than 60 priority districts and prefectures on the ground in Guinea, Liberia and Sierra Leone, the three most Ebola-affected countries.

“In districts with ongoing Ebola transmission, WFP is ensuring that WHO disease detectives have the resources they need – computer equipment, phones and stable internet connectivity – to share information critical to tracking and stopping the virus,” according to the announcement.

WFP is also managing the fleet of rugged vehicles carrying WHO social anthropologists and epidemiologists to isolated villages, where they will continue gaining the trust of communities to find and follow contacts of Ebola patients until all cases are resolved.

WHO is the directing and coordinating authority for health within the U.N. system and WFP is the world's largest humanitarian agency fighting hunger worldwide.

Food Marketing Institute: Ebola Is Not A Foodborne Illness