China’s stockpiling of milk powder after milk safety scandals in 2013 and Russia’s trade sanctions against the U. S. in retaliation for Western sanctions have caused demand for U.S.-produced milk to dry up. 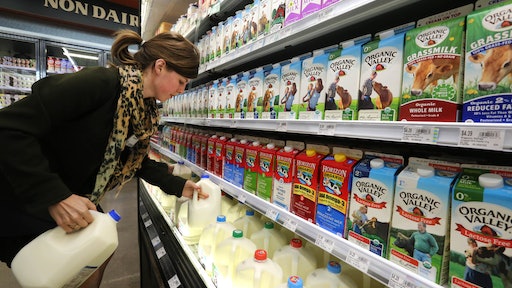 After making record gains last year, milk prices are expected to drop drastically in 2015 as the result of a drop in exports, according to International Business Times based in New York City. Dairy farmers are slashing prices to deal with their surplus and are concerned about being overwhelmed by production costs that aren’t following the downward trend.

“I guess I'm sorry if I'm hurting the farmer or the middleman, but I'm certainly delighted to pay under $3 a gallon," Michael Kleinhenz of Madison, Wis., told the Associated Press.

Milk prices are expected to nosedive in March to $13.50 per hundredweight (roughly the equivalent of a 10-gallon tank) from a peak of $25 less than a year ago, Norbert Hardtke, director of milk marketing at Family First Dairy Cooperative in Madison told AP.

Farmers are feeling the pinch. "I'm very worried because it's such an extreme drop," Milwaukee farmer Rick Steger said, adding if prices continue to fall, his income will decrease by a third. "Our expenses aren't going to drop." AP also reported Dairy Farmers of America, a national marketing cooperative, has started charging its 15,000 members 50 cents per hundredweight to finance additional transportation fees and low prices.

The milk price drop is the result of overproduction and the struggle to deal with surplus stock. Less than a year ago, dairy farmers struggled to meet global demand as milk prices climbed, said Mark Stephenson, director of dairy policy analysis at the University of Wisconsin. Many farmers expanded production by purchasing new equipment and cattle in response. But China’s stockpiling of milk powder after milk safety scandals in 2013 and Russia’s trade sanctions against the U. S. in retaliation for Western sanctions have caused demand for U.S.-produced milk to dry up, Stephenson told AP.

California and Wisconsin supply most of the country’s milk, and cooperatives have asked many farms to pour out their excess when the glut in the Northeast reached its peak during the holidays. "It's something that no farmer likes to do. ... It doesn't feel good to just dump it out," said Jon Greenwood, a board member of the Northeast Dairy Producers Association. In the milk slump in 2009, the Newark (New Jersey) Star-Ledger reported some dairy farmers slaughtered stock to save on feed costs.