In April, the value of Maine exports to Iceland exceeded the total for 2013, putting exports to the island nation on pace to at least double this year. 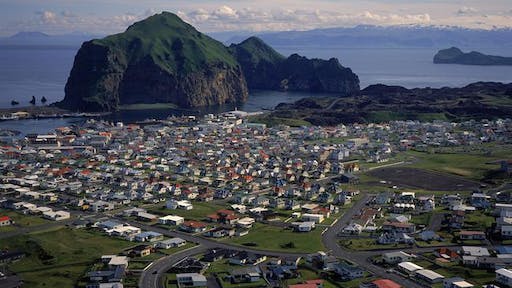 In April, the value of Maine exports to Iceland exceeded the total for 2013, putting exports to the island nation on pace to at least double this year.

The figures highlight potential that the 16 Maine companies and educational institutions taking part in a trade mission in Iceland and the United Kingdom this week see in the trade route opened by Icelandic shipper Eimskip. The company moved its first container shipment out of Portland's International Marine Terminal in March 2013, where it started with two employees. In May, Larus Isfeld, general manager for Eimskip USA, said the company would have about 10 employees there by the end of the summer.

"We're not going to continue to grow like that every year but we'll continue to put in manpower that we think we need each year," Isfeld said during a panel discussion at Maine International Trade Day.

Janine Bisaillon-Cary, president of the Maine International Trade Center, which is leading the trade mission this week, wrote in an email from Iceland that her office was surprised about surpassing last year's export total so quickly, but the service is gaining attention from shippers and receivers in the region.

"There have been a lot of efforts by Eimskip, the Maine Port Authority and MITC towards building up the usage of the port and getting the service recognized and used by shippers and receivers in Maine and New England," Bisaillon-Cary wrote. "Whether it is increasing Maine exports or increasingly having Maine used as a export/distribution hub, there are positive economic results for the port and for the State as a whole."

For some of the companies, like those producing paper goods and grains, she said Iceland and Northern Europe are new markets.

According to figures from MITC, the most-exported item from Maine is newsprint, which Bisaillon-Cary said is one of the few exports manufactured elsewhere and shipped through Portland. Exports of newsprint were up approximately $140,000, to $732,000.

Cars and other vehicles were the next-highest export, followed by toilet paper and other tissue products, which also have already outpaced the total exported from April to December of last year.

For the trade mission now in Iceland, state officials and companies are also seeking broader opportunities in the region.

By comparison, Maine's largest trade partner, Canada, received around $1.3 billion in exports from Maine in 2013, according to census figures. The next-largest export destination was China, at $226 million.

Along with the trade stops in Iceland and the United Kingdom, Eidsness is also leading the state's first exploratory visit to Greenland. In May, she told the Bangor Daily News that melting ice is exposing more of the country's resources and attracting foreign investment in industries like mining.

The trade mission now in Iceland includes representatives from Whiting-based Bar Harbor Foods, Maine Grains in Skowhegan and others in industries including food processing, life sciences and logistics.

Gov. Paul LePage was scheduled to meet with Iceland's president Olafur Grimsson as part of his visit as the Maine Maritime Academy's training vessel the "State of Maine" makes a visit to the country's capital, Reykjavik. The ship will host a reception for participating companies and promote Maine as a tourism, trade and foreign investment location.