According to association, No On 37, Prop 37 would cost the average California family up to $400 per year in higher grocery costs. 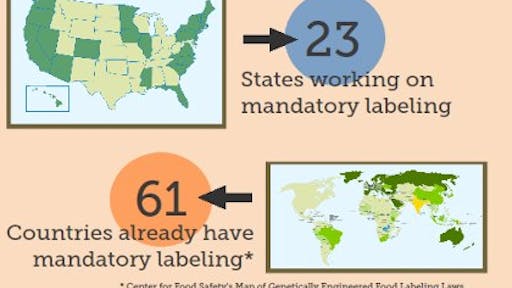 According to the Center for Food Safety, 61 countries already have mandatory labeling.

Last Wednesday, California voted on whether to approve Proposition 37, which would require all food manufacturers, distributors and retailers to add labels that identify genetically modified organisms (GMO’s). Proposition 37 has been defeated by 53.7 percent of voters against the mandatory labeling of GMO’s, but the campaign is far from over.

“It was really a historic victory for the non-GMO movement,” says John W. Roulac, CEO and founder of Nutiva. “The fact that we got 47 percent of the vote, [and] almost fought the GMO giants to a standstill in spite of them spending $50 million dollars in misinformation, I think is a major victory.”

Opponents of the legislation stated that Prop 37 would have a negative impact on the entire food industry and lead to an increase in grocery bills. According to association, No On 37, Prop 37 would cost the average California family up to $400 per year in higher grocery costs, which Roulac rebuttals.

“There’s no connection to increased grocery bills,” says Roulac. “On average, every food manufacturer changes their labels 1 to 2 times a year. Their concern is that people will figure out that they don’t want GMO’s in their food and would shy away from it.”

Although the majority in California voted against the mandatory labeling of GMO, the initiative is still going strong.

“This has just fired people up,” says Roulac. “What’s next is to educate millions of more people about our right to know.”

Organic manufacturers and organizations such as Nutiva, Natures Path and Green America have formed a coalition called GMOInside.org in order to create awareness to Americans about GMO’s and their right to know what they’re consuming.

“Monsanto [a leading producer of GMO’s] just spent $50 million dollars telling everyone you don’t have a right to know.”

“We’re moving from disappointed to what’s next – and GMO Inside is what’s next,” concludes Roulac.

Are We on the Cusp of the Next GMO Food War?

Now that disruptions are commonplace through overseas cargo transport, companies now negotiate contracts differently. Hear more about the disruptions from a legal perspective on this week's podcast episode featuring a partner of FisherBroyles.
FisherBroyles
December 7, 2021
Follow Us