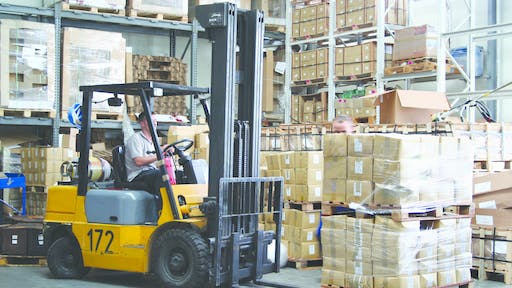 It’s no secret that product recalls have increased in recent years, especially in the food and beverage industry. And, while the recalls involving tainted food naturally make the headlines, there are plenty of other product recalls and reverse logistics projects that are equally important in their own right.

The reverse logistics projects themselves, however, are anything but typical.

“What we offer is customized solutions,” says Bodenheimer. “It could be a straight returns and credit processing project, it could be testing, repair, and refurbishment of electronics, or it could be engines, transmissions, and drive trains for an automotive manufacturer.”
Bodenheimer likens Genco ATC’s reverse logistics services to the foundation of a house. “We operate from a standard base, and from that you can build whatever you want on top.”

Inmar is another major player in the reverse logistics space and they also serve an array of industries, from the food and beverage (including wine and spirits) sector to footwear, pharmaceuticals, automotive, electronics, and sporting goods. The company’s nationwide network includes 33+ facilities encompassing 4 million square feet.

Not surprisingly, Inmar’s involvement with various sectors means there is a lot of interaction with federal agencies.
“If you can think of the acronym, chances are I have to deal with it,” remarks Jeff Pepperworth, president of Inmar’s reverse logistics. Indeed, that means interacting with the DEA, the FDA, EPA, USDA, and CPSC, for starters.

An evolving market
New and evolving government regulations coupled with a host of other factors are driving changes in the marketplace, says Pepperworth.
“It’s resulted in a heightened state of sensitivity,” particularly for the food and beverage companies, he says.
In addition, Pepperworth is observing tighter government activity further up the supply chain. “Typically, government agencies would visit a reclamation center or a distribution center. But, because of some of the forward stream of activity that’s happening in the storefront, we’re starting to see more government agency visits at the storefront with the expectation to levy fines.”

The days of issuing a warning seem to be over as well. “They are penalties nowadays,” says Pepperworth. “Government agents have also been given more authority and the fine schedules have been extended too.”
Genco ATC’s Bodenheimer adds that the Bioterrorism Act, along with Sarbanes-Oxley, which focuses on more rigorous auditing, are also impacting the marketplace.

Food and beverage producers have not been industry leaders when it comes to their ability to track and trace product, however, especially in the event of a recall.

“When you look at the food and beverage sector, more often than not, when there’s a safety recall the store just gets ‘cleansed,’” says Pepperworth. That’s in contrast to the pharmaceutical industry, he says, which tends to be a lot more ahead when it comes to identifying lot and date problems, making them “better equipped to account for the items in question.”

Perception is another concern, says Pepperworth. For instance, “when you totally deplete a retail shelf, you create customer concern, and you risk brand loyalty in some cases.” The retailer, meanwhile, is more concerned with the product being purged from inventory and less worried about how the customer will perceive the empty store shelf.
Although the food and beverage industry may be a bit behind the curve, it’s working hard to catch up, according to Pepperworth and Genco ATC’s Bodenheimer.

Pepperworth says his work in a range of industry verticals allows him to take best practices from various sectors and apply them across Inmar’s customer base.

He also credits the industry for proactively seeking partners such as Inmar to help boost their ability to effectively deal with product recalls. Part of food and beverage companies’ willingness to improve their processes involves training, too.

Inmar provides mock training events for customers, says Pepperworth. “We walk their entire organization through a mock recall event. That way, we can identify gaps in their processes and if they ever have an actual recall event, they’re very prepared.”

The role of technology…
Aside from training and the other tools that reverse logistics providers are using to elevate their customers’ ability to respond to recalls, the most important is technology, emphasizes Pepperworth and Bodenheimer.

“In the retail environment, particularly with the larger retailers, we’re seeing more sophistication in technology, particularly with inventory management,” says Pepperworth. “It’s become more automated. The larger retailers are also equipping themselves with wireless capability and handhelds, for instance, so the ‘transaction’ of an item is happening much more quickly than it was 10 years ago.”

Inmar has made significant investments in technology in recent years. “Over the past four years, we’ve invested $100 million in IT infrastructure alone,” says Pepperworth. “That investment has primarily been around speed and speed of identification.”

“In the food and beverage industry, we can provide great detail and speed around the identity of products (at the UPC level) and what’s going on with them.”

Information is key, says Pepperworth. “The technology that’s being deployed is all about faster and more efficient information. In addition, we can also interpret what that information is telling our customers. The analytics aspect is very important.”

Bodenheimer sees plenty of advantages with technology too, starting with the ability to track and trace product.
“You have to be able to track, whether it’s mandated or a voluntary recall or a withdrawal event. And, you have to have a timely mechanism for performing that tracking function.”

He adds, “The other piece is that many companies are faced with a lack of visibility and insight into their financial exposure if the system they have in place doesn’t have the type of flow that offers timely handling and processing, as well as immediate visibility into what’s been received, what’s been processed, and what’s been dispositioned.”

According to Bodenheimer, “We’ve really built our program on a strong technology platform. Our software, R-Log, is web-enabled and fully customizable. It provides a secure portal and visibility into the data.”

Bodenheimer says that the company’s use of Sky-Trax is another example of how technology is helping transform the entire reverse logistics process.
“It allows us to automatically track assets down to a couple inches of accuracy within a facility. Warehouse equipment, like fork lifts for example, we know where it is at any time. This improves warehouse safety and efficiency tremendously—fewer incidents and lower operating costs, improved inventory accuracy, and greater throughput.”

Now that disruptions are commonplace through overseas cargo transport, companies now negotiate contracts differently. Hear more about the disruptions from a legal perspective on this week's podcast episode featuring a partner of FisherBroyles.
FisherBroyles
December 7, 2021
Follow Us