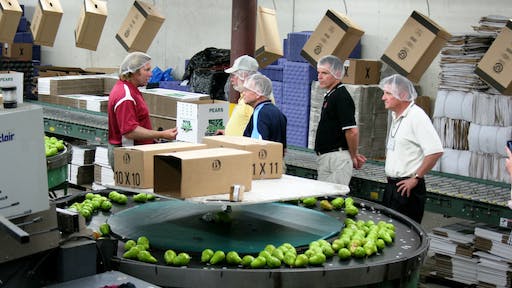 Fruits and vegetables are a key part of a healthy diet, but because of the way produce is grown, handled and consumed (often raw), it can become contaminated with foodborne pathogens that may make consumers sick. Farmers understand the importance of food safety when they grow their crops, and so did Congress when it passed the FDA Food Safety Modernization Act (FSMA) in 2011. This law, for the first time, charged the FDA with establishing science-based standards for the safe production and harvesting of produce.

The resulting Produce Safety Rule requires domestic and foreign farms to put preventive measures in place during growing, harvesting, packing and holding of their fruits and vegetables to protect these products from contamination. Another FSMA rule, Current Good Manufacturing Practice, Hazard Analysis, and Risk-Based Preventive Controls for Human Food (the Preventive Controls rule), requires food facilities, such as fresh-cut produce processing plants that prepare bagged salad mixes or fruit salads, to have a food safety plan in place. These plans must include an analysis of hazards and risk-based preventive controls to minimize or prevent those hazards.

In an effort to better assist farmers and processors in achieving these goals, the FDA released on Oct. 19 two new, draft guidance documents, one of which will help farmers better understand the range of steps they can take to comply with the Produce Safety Rule. The other will help processors better understand the relevant provisions of the Preventive Controls Rule for fresh-cut produce that apply to their practices.

To accommodate growing practices that vary by region and commodity, FDA Commissioner Scott Gottlieb says in a statement that flexibility was built into the Produce Safety Rule, which is reflected in the new draft guidance document. The draft guidance for farmers, “Standards for the Growing, Harvesting, Packing, and Holding of Produce for Human Consumption: Guidance for Industry,” gives examples of possible approaches to comply with the Produce Safety Rule to demonstrate how the rule might be implemented on different kinds of produce farms.

"It’s important to recognize that not every scenario is covered in the draft guidance, and farmers can always use an alternate approach as long as it satisfies the requirements of the Produce Safety Rule. But farmers can use the draft guidance as a guide to help evaluate their own on-farm practices," he adds.

The second draft guidance document released, “Guide to Minimize Food Safety Hazards of Fresh-cut Produce,” discusses how fresh-cut produce processors may comply with recently modernized requirements for current good manufacturing practices (CGMP) and with new requirements for hazard analysis and risk-based preventive controls. Fresh-cut fruits and vegetables are those that have been physically altered (e.g., chopped, diced, peeled, shredded, sliced, etc.) after being harvested without additional processing, such as cooking, that could kill potentially dangerous bacteria. This draft guidance, when finalized, will replace the 2008 guidance, “Guide to Minimize Microbial Food Hazards of Fresh-cut Fruits and Vegetables.” The aim is to give producers more up-to-date guidance.

The FDA will also be holding four public meetings around the country to introduce and get feedback on the draft Produce Safety Rule guidance. Stakeholders will have the opportunity to discuss food safety practices with FDA experts. Dates and locations of these meetings will be announced via a notice in the Federal Register.

"Stakeholder input and feedback has been a critical part of the FSMA implementation process, and we’re committed to hearing all perspectives," Gottlieb says. "Our aim is to ensure that the guidance we put in place will help industry comply with the new food safety standards and achieve the goal of producing safer produce."