A Superior Court Judge ruled that California coffee brewers must label their products with a cancer warning after companies failed to prove that there were more benefits to drinking coffee than risks. 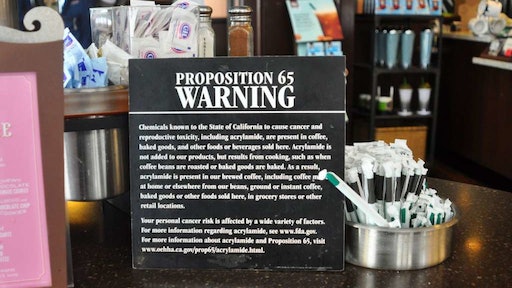 A California judged issued a final ruling that requires coffee companies to label their products with a cancer warning in California, the Washington Times reports. The decision supports a 2010 suit filed by Council for Education and Research on Toxics that argued coffee products should notify consumers that the known carinogen acrylamide is produced during the coffee roasting process.

Coffee companies have been working together since April 10 to prove to Superior Court Judge Elihu Berle that the limited amount of carinogen does not affect consumers. However, Berle ruled that the companies failed to show the benefits from drinking coffee outweighed any risks.

Many brewers are subjected to pay millions of dollars in fines for not having the proper warning displayed.

It has not been reported when all brewers will officially have to have the label on their products.