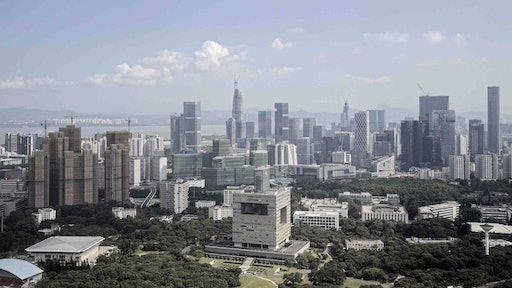 Once a poor backwater in Guangdong province, Shenzhen today is the sprawling epicenter of China’s consumer-electronics industry, the country’s top export.

Two Foxconn Technology Group factories, which about 230,000 workers make gear for Apple and global rivals, including Chinese communications giant Huawei Technologies Co., have their base in Shenzhen. Yet many executives here say they aren’t worried by President-elect Donald Trump’s latest threat to compel Apple Inc. and others to manufacture more at home.

The economic forces that transformed the sleepy village into a sea of skyscrapers are too massive to be rolled back, their thinking goes. Even if Trump imposes tariffs on Chinese-made goods, as he has threatened to do, it’s now so efficient to engineer, produce and ship electronics from this region of southern China that it could still outcompete the U.S., they say.

“We are very relaxed about the talk of tariffs, although the noise it creates is not good,” said a senior executive at a global consumer-electronics firm with operation in Shenzhen, who spoke anonymously to avoid entering the debate over Trump’s proposals.

To read more, view the original article at www.wsj.com/articles/bring-back-jobs-from-china-in-shenzhen-they-arent-that-worried-1482316231.

A second investment for Red Sun Farms in Ontario is underway with an additional 18 acres of high-tech greenhouse farming, which will drastically expand Red Sun Farms’ overall portfolio and bring the total acreage for this location to 42 acres.
Red Sun Farms
September 14, 2020

How Automation is Revolutionizing Work in the Food Supply Chain

In an age when shifts can and do happen in the blink of an eye, automation offers the chance to revisit how work is done and how to keep workers safe.
Vecna Robotics
September 8, 2020

Here are some of the key “locational drivers” involved in a property’s demand in the marketplace — a unique combination of location, size and in-place infrastructure.
Neil Johnson
September 2, 2020
Follow Us