The last of Hawaii’s sugar, a little more than 30,000 tons, will be delivered to mainland U.S. in the coming weeks. 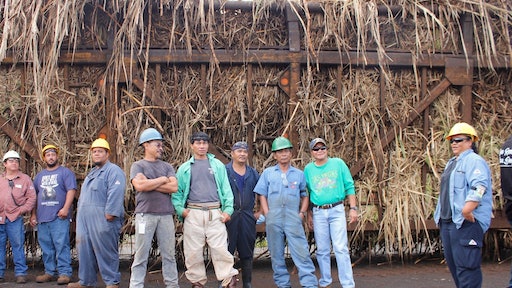 Some of the remaining workers at the mill stand in front of the last hauler truck of Hawaiian sugar cane.

The last of Hawaii’s sugar, a little more than 30,000 tons, will be delivered to mainland U.S. in the coming weeks.

Hawaiian Commercial & Sugar (HC&S) company, the last of Hawaii's sugar mills, is set to close in 2017, as hundreds of workers wrap up the final harvest and say goodbye to a crop that shaped the islands.

For more than a century, the sugar industry dominated Hawaii's economy, but that changed in recent decades as the industry struggled to keep up with the mechanization in mills on mainland U.S. That and rising labor costs have caused Hawaii's sugar mills to shut down, shrinking the industry to this one last mill.

Bill Cavilla is one of 675 workers who will lose their jobs once this operation closes by the end of the year. "It's just an emotional thing," he says. "Just realizing it's going to end."

How Can We Manage Demand For Fresh Food In Asia Sustainably?

How Supermarkets Can Repurpose Food Waste