Aside from operating traditional stores, Ahold owns online grocer Peapod. After a merger with Delhaize, Peapod would have access to the Delhaize network and potentially 1300 new pick-up points. 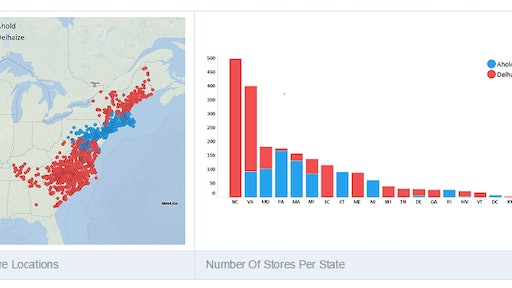 The proposed merger between Dutch-owned Ahold and Belgium-based Delhaize would create a major force in the U.S. grocery landscape, according to Ortec Consulting Group based in Atlanta, Ga. The consultancy recently did an analysis on the merger. Following is the analysis.

A merger between Ahold and Delhaize would be considered a new milestone in a retail sector that has been consolidating since the 1980s. There has been a lot of buzz about this possible fusion lately. On the one hand, analysts estimate that the benefits range from $500 million to $1 billion and on the other hand, there are the labor unions worrying about reorganizations and job losses. Ahold and Delhaize both have the lion’s share of their activities in the U.S. so ORTEC looked at publicly available data and compared both companies’ U.S. operations to determine what the merger could mean in the U.S. retail market - the largest and most innovative in the world.

"Ahold and Delhaize are highly complementary and a merger would likely generate benefits for both companies," stated Goos Kant, Ph.D, ORTEC board member and retail industry expert. "Our team conducted a thorough analysis of data from ING, Rabobank and other public sources indicating a merger would be a clear win/win."

Geographically, Ahold and Delhaize complement each other perfectly. Both are active exclusively in the East Coast. In states where Ahold stores like Giant and Stop & Shop are present (namely Pennsylvania, Connecticut, Massachusetts), Delhaize is hardly present. In states where Delhaize is present with Food Lion and Hannaford, Ahold is barely active. With a merger, they would cover the entire East Coast.

Aside from operating traditional stores, Ahold owns a very successful online grocery: Peapod. Peapod works with several Ahold brands in the US: Stop & Shop, Giant Food Stores and Giant Food. After a merger with Delhaize, Peapod would have access to the Delhaize network and potentially 1300 new pick-up points that have the benefit of being located in less populated areas - a great advantage for an online grocer.

To conclude, Ahold and Delhaize are highly complementary. Ahold has a larger footprint in urban areas, while Delhaize has its presence in rural areas. Considering the amount of stores, Delhaize is the larger party. Looking at financial figures, Ahold has the upper hand. Since both companies are operating different brands and formulas in mostly different regions, in the early stages of the intended merger, benefits will be mainly found outside the supply chain. Other benefits of a possible merger are:

Ahold Commits To Cage-Free Eggs By 2022