On August 18, more than 700 MCFA employees, including recently appointed MCFA president Hiroshi Nagai, gathered for an ice cream social to celebrate the manufacturing milestone. The 350,000th forklift, a member of the 3,000–7,000 lb. Internal Combustion (IC) Pneumatic Tire lift truck family, painted blue and branded MCFA, was on display and later will be used in fabrication and assembly tasks around MCFA facilities.

MCFA formed in 1992 when Mitsubishi Heavy Industries, Ltd. (MHI) entered into a business relationship with Caterpillar Industrial Inc. (CII). The company produced its 100,000th forklift in 1998 and four years later, in 2002, moved into its current headquarters in West Houston. In 2005, MCFA celebrated the shipment of its 250,000th forklift and now in 2011 celebrates its latest milestone with the production of the 350,000th forklift from its Houston manufacturing facility.

"MCFA prides itself on manufacturing quality and reliable products," says Jay Gusler, director of operations, MCFA. "We're excited to reach this milestone of 350,000 forklifts produced from our Houston manufacturing facility and appreciate the support of our employees, dealer network and customers in helping us realize this major company achievement." 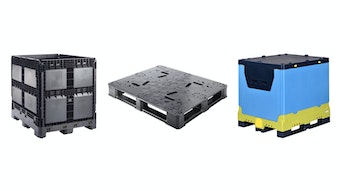 Online Grocery Sales Down 16% Vs. Year Ago

Having a technologically advanced WMS that provides easily accessible and real-time information data to employees – on-site or at home – is paramount to improving operational efficiencies warehouse wide.
SnapFulfil
June 14, 2021

Peak Technologies returned to the original company name in place since its founding in 1981 until Peak acquired Ryzex in 2011 and combined the names to symbolize the union of two industry leaders.
Peak Technologies, Inc.
June 7, 2021