A Pallet For Every Taste 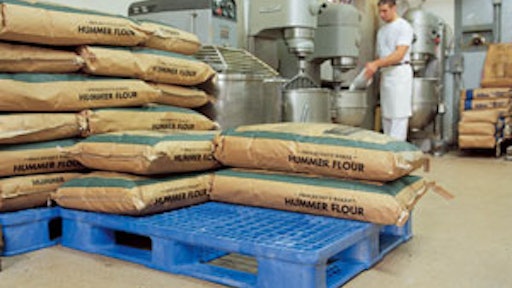 Stories about meat and produce contaminated by wisteria, E coli and other deadly bacteria are hitting the news on an almost daily basis, highlighting the growing concern over food safety in the United States.

In addition, fires at food manufacturing facilities are raising questions about safety at these plants and how a company's choice of material handling equipment can make a difference. These and other issues are forcing food manufacturers and distributors to pay more attention to alternatives to white wooden pallets.

Today there are dozens of companies in the marketplace that are offering alternatives that range from plastic pallets to aluminum pallets to steel pallets. Each of these pallet choices presents solutions that may make them worth considering.

The manufacturers of plastic pallets stress their products' durability. Some cite large numbers of turns for their pallets that run in the 150 to 250 range. Wooden pallets, they say, average seven to 10 trips.

"A wood pallet will take four or five hits with a pallet jack and then you have to replace a deck board," says Curt Most, national sales manager for pallets for Orbis Corp., Oconomowoc, WI. "There are only so many places you can put a nail in the stringer."

Because of the composition of plastic pallets, manufacturers and distributors are relieved of the dangers of dealing with wood shards or nails in their sensitive environments.

"If you're running conveyors, with plastic pallets you're not going to have pieces of the pallet that can get caught in the conveyors or cause problems with any of the automated equipment," notes J.D. Coult, national sales manager, material handling group, for Rehrig Pacific, Los Angeles.

Bob Noland, senior vice president of sales and marketing for plastic pallet maker Greystone Logistics, Tulsa, OK, says in addition, companies don't want foreign objects such as nails or wood chips that can fall off of damaged wooden pallets ending up in their products.

"I've been to the facilities of a major cereal manufacturer which used to have full time people on each shift to air blow the wood chips out of all of the lines. It had so many wood splinters that came off the line due to the chain conveyors eating away at the wood pallets, that it had to clean it continuously day in and day out," he says.

"It had a pile of refuse behind its facility that made it look like it was a mulching company."

The manufacturer later switched to plastic pallets. "A pallet can create a lot of damage in the supply chain if it's not designed properly or doesn't do what it's needed to do."

Part of that damage can result from the fact that there are variances in the dimensions of wooden pallets, which can cause them to become stuck in retrieval lanes.

"I have a customer who has an ASRS system and he was using wood," explains Orbis' Most. "The wood pallets just weren't all that identical. He was sending people into a freezer 30 times a day to repair the wood pallets, but now that he's got plastic, he doesn't have to send them in as much."

Plastic pallets, he says, because they are created from a molding process, maintain a consistent uniformity that allows them to interface with machinery in a much smoother fashion. "It's the reliability of the dimensions. If you can put a pallet through your system the first time, all the pallets that follow it are going to run through your system all the time, every time, because the dimensions are the same."

Many pallets contain different resin blends that allow for added durability, while others can have metal or fiberglass rods inserted into them when they are formed, to provide stabilization for heavier loads.

Other types of pallets are constructed with structural foam, which is made of plastic resin that is mixed with gases during the molding process to form small air cells within the plastic, creating stronger and lighter weight walls and bases underneath a solid surface.

Another reason plastic pallet manufacturers say their product is superior is because it's free of cross-contamination issues. Wood, they claim, is a breeding ground for E. coli, salmonella, wisteria and other dangerous bacteria.

"Plastic is better than wood in situations dealing with food processing, because the possibility for bacterial growth is ruled out," says Rehrig Pacific's Coult. "Bacteria doesn't linger on plastic because it's not absorbent like wood is."

"One of our big produce customers converted from wood to the iGPS plastic pallet," says Rex Lowe, president of iGPS Co. LLC, a plastic pallet pooling company out of Orlando, FL. "It used to have to swab all its wooden pallets to prevent cross contamination and it became tired of having to reject almost half of its pallet loads."

He adds that since iGPS tracks its pallets, the company knows exactly where they've been-and what they've held. Certain companies that manufacture flour or sugar will not take pallets that have held raw meat or peanut products, because flour and sugar are highly absorbent materials and might absorb whatever residue is left on a pallet.

"When a wooden pallet arrives that has no history on it, you don't know what it's been carrying before it comes to your plant," says Rex. In addition to tracking the history of its pallets, iGPS also cleans them thoroughly after each turn.

"What we found in the marketplace is that companies are looking for something easy to clean and maintain," notes Brent Theiling, executive general manager for LM Containers, a manufacturer of aluminum pallets located in Hayti, MO.

"Aluminum is a perfect material for cleanliness and sanitation."

Theiling says aluminum can be used to create pallets resistant to rust. This makes them perfect in food preparation applications, where pallets need to be washed down with chemicals or high pressure hoses.

The durability of aluminum pallets also pays off during facility inspections. Health and OSHA inspectors won't find cracked or shattered pallets, loose nails or other hazards associated with plain wood pallets. The pallets have no sharp edges, are extremely durable and do not use mechanical fasteners-they are assembled using robotic welding processes.

"We were trying to simulate as many turns as we could to see what kind of damage we were getting."

He says Worthington's pallets averaged a damage rate of six percent, as opposed to 25 to 30 percent, which he says is the damage rate for wood pallets.

The company was also able to get 52 turns on the steel pallets-a simulated four to five years' worth of usage-and sturdier pallets mean more products arrive at their destination undisturbed and uncontaminated.

According to LM and Worthington, pallet contamination is not an issue when aluminum or steel pallets are utilized, as neither can absorb liquids or cleaners.

"That's a huge advantage when you place pallets in a freezer where water or blood and guts might fall onto them. If the pallets were wood, those things would freeze right onto them," explains Theiling. "It's not a problem with aluminum."

In addition, thanks to their solid nature, neither steel nor aluminum can be infested with harmful boring insects that can contaminate food product.

"Also, there's no way of telling if you have wood chips or sawdust in your food product," says Worthington's Polver.

"However, you can detect if there's any kind of metal, as most production systems have metal detectors in them. We see a huge opportunity to help solve contamination issues through the use of our pallets."

Another advantage of both steel and aluminum pallets, unlike other types of pallets, is that they are completely fireproof.

Pallets are an integral part of the product transportation-that much will never change. However, a new pallet handling system has been designed by Charles Kiolbasa, chairman and founder of Layer Saver, Hinsdale, IL.

Layer Saver is a collapsible, reusable, two-layered pallet shipping vessel made from plastic. The unit consists of a base and a supporting frame that is composed of plastic and steel bars. Within this, it can hold a standard plastic pallet with several rows of corrugated cartons on it, or just hand-stacked items. It also provides a sturdy base that another pallet of goods can sit on top of-allowing 25 to 50 percent more product within the same footprint.

"It's a flexible design that lends itself to every aspect of shipping products from the DC to the store," says Kiolbasa. Shippers can store fragile or irregularly-shaped items, or odd-sized loads in the first level-say a few cases of linguini, or bags of charcoal briquettes-items that might be damaged or crush other items if haphazardly packed into a truck. "You can stack a case of toilet paper on the next level."

One of Layer Savers' clients, by combining pallets and hand stacked items in the units, has lowered the trucks leaving its DC from 40 to 25. "An astronomical savings," says Kiolbasa.

A typical truckload would see 10 to 12 of the 40-inch x 48-inch Layer Saver units, mixed in with standard pallets, he adds.

A new line of scissor dock lifts from Presto ECOA aims for can transfer loads from truck beds to loading docks up to 59” in numerous configurations.
Presto ECOA
March 18, 2021

Planning, preparing and implementing health crisis mitigation measures in the workplace will ensure everyone that their health and well-being are priority, while ensuring that the facility is better prepared for the future.
AIB International
March 3, 2021

Choosing the Right Vehicle Restraint for Your Loading Docks

There are many things to consider when choosing the right vehicle restraint for your loading docks.
Jeremy Artz
December 16, 2020

To prevent from food spoilage and waste, farmers are increasingly taking advantage of programs allowing them to store pallets in their fields and facilities.
CHEP USA
December 7, 2020

Air Cargo Lifts from Southworth Products Corp are high-capacity, heavy-duty scissor lifts designed to speed and simplify the transfer of loads to and from transport vehicles to cargo terminals and off-site warehouse and distribution center facilities.
November 20, 2020
Follow Us