Behind the alarming headlines about Mexican border problems, business and government leaders create trade partnerships for food and other products. 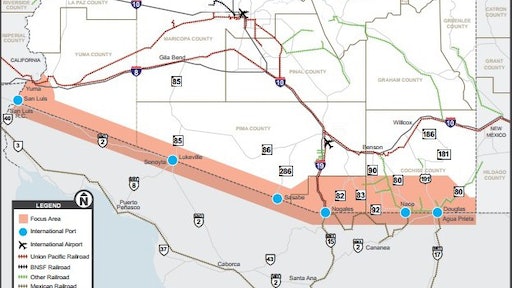 When it comes to the U.S. Southwest border, much attention has focused on national security threats such as drug and human trafficking as well as terrorism. However, the U.S./Mexico border also offers opportunities, thanks to its natural strengths such as the industrial clusters already in place. What’s possibly even more important to the stability and prosperity of the border is the leadership being undertaken to improve cross-border trade.

An initiative, coined as the “New Arizona-Sonora Partnership” has been already set in motion by many players on both sides of the border including state and local governments, the private sector, academics, interest groups and advocates. The days when Phoenix, Ariz. and Hermosillo, Sonora were not collaborating are gone, and both Arizonans and Sonorans are engaging actively in trade, investment, cooperation and political dialog. There is a new understanding on both sides of the border, but why is it so important to keep this momentum going? How can we foster the current mutual understanding and progress?

After Arizona Gov. Doug Ducey and Sonora Gov. Claudia Pavlovich took office last year, they made clear that the Arizona-Sonora relationship was a priority for their administrations, and over the last year there have been very symbolic moments of trust at the capitol level.

While the press has extensively covered the state level dialog and initiatives, local governments along with the private sector (Global Chamber) and pundits have taken leadership by working aggressively behind the scenes in keeping the momentum going. While at the federal level there is an ongoing debate of the direction of U.S. foreign and national security policies, at the city and community level, every stakeholder understands that peace and stability can be achieved by international trade that translates into economic development without any other ideology than increasing profits.

Helping the economy grow and redistributing the revenue can be achieved at a regional level only if we are able to enable and encourage decision makers (in the public and private sector) to meet, trust each other and work together for a new Arizona-Sonora Partnership to continue fostering the economic interdependence that binds both sides and developing new logistical infrastructure to make the American Southwest a competitive regional block in the Pacific region. This cooperation is taking place at the dawn of the Trans-Pacific Partnership (TPP), which will counterbalance the Chinese and Russian economies (in case they decline joining the treaty) and boost the U.S. leadership in the world and the Pacific Rim.

In April 2015 the richest man in the world, who happens to be Mexican, Carlos Slim, came to Phoenix thanks to the leadership of a handful of people led by attorney Mike Patterson of the  Polsinelli law firm in Phoenix, Hank Marshall, economic development officer with the City of Phoenix, the Phoenix Business Journal and Global Chamber to talk about the U.S./Mexico interdependence and the importance of investing in education and training. On the sidelines of this event, many conversations became business opportunities for Canadian, Mexican and U.S. companies. This was a token of advocacy of some business leaders of Arizona that recognize that the state needs to become more globalized in order to be an important economic engine in the American Southwest region.

That same month in the City of Tucson, Mayor Jonathan Rothschild of Tucson and Mayor Ernesto Munro of Rocky Point led a group of 17 mayors from Sonora and Arizona to meet each other after the new Sonoran mayors took office in September, having for witnesses of honor the regional consuls of Mexico and the U.S.

This meeting in Tucson provided a continuation of efforts already in place to strengthen the channels of communication at the local level, such as the Maricopa Association of Governments’ Ari-Son Mega region project that was introduced in 2014 along with the BIEN (Building and International Economic Network) free business online database, for furthering the city level dialog and the business-to-business connections.

BIEN has the support of important business leaders in Canada, Mexico and the U.S. and is envisioned to be the web search engine for the businessmen of the North American Free Trade Agreement (NAFTA) looking to expand operations in the North American region, reducing the hazard of business-to-business outreach.

While Phoenix concentrates the most advanced industrial clusters in Arizona, it is also clear that Tucson, besides being the natural logistical hub into Mexico for its geo-strategic location and cultural closeness, is transitioning into the higher value industries.

On January 2016, Mayor Rothschild of Tucson, for the second year in a row, hosted the Borderlands Trade Conference for discussing how to make the most of the industrial clusters created by NAFTA. The City of Tucson, with the support of many mayors of Arizona, Sonora and Sinaloa, showed political leadership and positioned itself as the gateway of Arizona into Mexico leaving the door open for further economic interdependence.

On Feb. 10, 2016, the City of Phoenix hosted high level conversations at the office of Michael Patterson (Polsinelli), who has been a great advocate for the globalization of Arizona. With the Secretary of Economy of Sonora and his assistant secretary and directors for foreign trade, the leaders discussed the current state and future of the Arizona-Sonora economic relationship from the traditional sectors (food and tourism industries) to the modern sectors (high end manufacturing and new technologies).

Focus on small- and mid-size firms

The leaders agreed there are two complementary economies that need to move forward into more advanced industrial clusters at the small- and medium-size business level to the transnational corporation level.

NAFTA’s assumption is that three economies of different sizes and with different capacities can supplement each other to be a competitive region in the global economy. This same premise applies to Arizona and Sonora, and we can foster the bilateral interdependence in the best interest of both states.

If we manage to develop clusters and supply chains, we can utilize the competitive advantages of both parties to truly create a vibrant region. By attracting foreign and national investment to Arizona, hosting the headquarters and logistical operations in Arizona, while making the most of Mexico’s business friendly environment (low operation costs and intellectual property enforcement), the American Southwest can truly become the fifth largest economic engine in the world with a population of about 60 million consumers and a GDP of $3 trillion.

For becoming a true haven of innovation in the desert, we all must continue nurturing the new Arizona-Sonora (Economic) Partnership at the metro level. That is why on Feb. 17, 2016 the Global Chamber hosted at DIRTT, a high-tech Canadian company based in Phoenix, the International State of the Metro. This was an event that showcased the extraordinary progress and remaining challenges for the Phoenix metro area in positioning itself as an oasis of HEAATT in the desert: Health, Education, Aerospace/Aerial, Technology and Tourism.

Once again the business leaders, public servants and experts confirmed that the Phoenix International State of the Metro is not only competitive and diverse but beneficial to our constituencies. Gilbert, Mesa, Phoenix and Surprise are leaders in attracting foreign and national direct investment to create high-wage jobs that make Phoenix a global metropolitan area in which we all can live, study, work, prosper and retire. If Arizona is open to business, we need to make sure the handshaking diplomacy translates into jobs that boost the state and city economies and strengthen the Arizona middle class while progressively graduating our most vulnerable minorities out of generational poverty.

If Phoenix is successful in its globalization efforts, the whole state will make progress, because Phoenix metro concentrates the largest share of companies that are engaged in foreign trade. We must remain steadfast in viewing progress in open, honest and transparent ways so that businesses in the metropolitan areas of Arizona and Sonora continue their interaction and growth. Many challenges remain, but if local government leaders along with business leaders are committed to cross-border trade, progress will accelerate.

Julio Espinoza is a U.S. Mexico relationship expert with credentials in academia, foreign policy, national security and international trade. He is currently advising local governments in Arizona and Sonora on their international efforts. He can be reached at giulioalessandro@gmail.com.

Doug Bruhnke is the founder and CEO of Global Chamber, an organization based in Phoenix, Ariz.