La Huerta faced a dilemma: should the Mexican frozen vegetable producer continue to store its finished products at the local refrigerated warehouse or build its own facility?

At La Huerta, which means "the farm" in Spanish, organically grown vegetables were blanched, packaged, frozen and palletized at the production plants. The goods were then trucked to a public refrigerated warehouse about three miles away for storage. The rental costs were astronomical.

"We were paying $100,000 per month for 9,000 pallet positions," says Felipe Arteaga, the commercial director of La Huerta, which is located in Aguascalientes, Mexico, a small town about 350 miles northwest of Mexico City. "We thought we could save money if we had our own freezer."

At first, Arteaga considered building a manual facility, using lift trucks and standard racking to move and store the pallets, and sketched out a design for a new building. Then he met with Beat Strub, general manager of SSI Schaefer's Mexican subsidiary. SSI Schaefer, headquartered in Germany, is a supplier of racking and complex logistics systems.

Strub tried to convince Arteaga that a highbay automated facility would make more sense economically. "When we looked at La Huerta's throughput, picking and storage data, we were convinced that automation would work well and costeffectively for this operation," says Strub.

After analyzing the data and doing some preliminary design work, Arteaga visited a site of one of Schaefer's customers that runs a large freezer facility in Brazil. After seeing the operation first hand, Arteaga agreed with Strub, and decided to build the first racksupported automated freezer warehouse in Mexico.

This was quite a huge leap for La Huerta, which was founded by Arteaga's father, José Arteaga, in 1956. José started out growing broccoli on a small plot of land, but by 1975 was exporting frozen vegetables to the United States and Canada.

Today, José Arteaga's four sons, along with a few of his grandchildren, are involved in the family business. The company produces 80 million pounds of vegetables each year, including broccoli, cauliflower, spinach, peas, carrots and corn.

About 90 percent of La Huerta's exports go to the United States and Canada, where the company has had great success. The rest go to Japan.

La Huerta offers 22 products that sell under the Little Farms and Nutri Verde labels at several U.S. grocery chains. It also supplies frozen vegetables to WalMart for its private label lines. Other customers include Stouffer's and Gerber, which is using La Huerta's spinach for its baby food products. Recently, the company began producing a line for Costco under the Normandy brand, which is sold in fourpound bulk bags. Getting the Costco business was a big win for La Huerta. "We competed with 17 other plants for that account-six from Mexico, one from Europe and 10 from the U.S.," says Arteaga. "We're now exporting 18 million pounds to Costco each year."

La Huerta built its first production plant in 1975 and, with demand growing, added a second production line in 1989. When NAFTA (the North American Free Trade Agreement) took effect in 1994, La Huerta was one of the first Mexican farms that took advantage of the opportunities that lay across the border.

Mexico is now the largest supplier of imported fresh and frozen vegetables to the United States. Mexican farm exports have nearly doubled from $2.7 billion in 1993 to $7.4 billion in 2001, according to the U.S. Department of Agri­culture, ac­count­ing for more than 70 percent of frozen vegetable imports.

La Huerta also has a thriving domestic business, capturing a high percentage of the Mexican frozen vegetable market. The company has expanded its product mix to include other types of frozen goods, such as dinners, veggie burgers and onion rings, but frozen vegetables-especially broccoli-remain the mainstay of its business. Broccoli and cauliflower are among the most labor intensive of all vegetables to freeze, but La Huerta, with almost 50 years of experience, has mastered the art of processing.

The next logical step to selfsufficiency was to build the highbay warehouse or "Igloo" as the folks at La Huerta call the facility. Planning began in the fall of 2002 and ground was broken in April 2003. La Huerta was able to work with Schaefer's original design, with a few minor changes.

The facility, which was up and running in 10 months, was built next to a La Huerta production plant. "The biggest challenge was to design a racksupported structure that could meet all of the safety and building regulations in an area that is considered a seismic zone with very high winds up to 90 miles per hour," says Strub.

The system was in full operation by April 2004. The 94,000squarefoot warehouse is 108 feet high and 460 feet long and stays at a constant temperature of 10 degrees below zero. It features 13,200 pallet locations spread out over 11 levels. Pallets are moved by one of three automated stacker cranes. "The weight capacity per pallet is unusually high: the pallets can hold up to 3,472 pounds," notes Strub.

Although the price tag for the facility was high, La Huerta expects a payback within four years. The stacker cranes on average can manage between 70 to 90 moves per hour, thereby significantly reducing labor costs. And while stacker cranes are obviously more expensive than forklifts-they cost around $250,000 each-they can eliminate more than 600 forklift man hours a week.

"The automation enabled us to reduce personnel by 40 percent and cut operational costs by 35 percent," says Arteaga. He estimates that the facility is saving the company between $70,000 to $80,000 per month. The facility runs in three shifts and is manned by 12 employees. Approximately 500 pallets are shipped each day in up to 15 refrigerated trucks.

Right now, the facility is at 80 percent capacity and the company plans to expand it in another two to three years. That comes as no surprise to Strub, who sees many opportunities for other Mexican food companies as well. "Schaefer opened a subsidiary office in Mexico City five years ago after we were selected to be a supplier of Volkswagen Puebla. We executed the most modern logistics center in the automotive industry in Latin America as a turnkey project. Additionally, Schaefer Mexico is active in other distribution and manufacturing industries as well, such as the beverage and pharmaceutical industries."

Organically grown produce is cut, packaged and palletized in one of La Huerta's production plants (1). From there, the product is moved, by conveyor, into the "Igloo," La Huerta's refrigerated warehouse (2). Eleven stories high, the warehouse consists of 13,200 pallet locations among three aisles. Aspallets are moved into the facility, they are weighed, measured and barcoded, and then sent into the warehouse via one of three stacker cranes (3). Each level is two pallets deep on either side of the aisle (4). The warehouse is linked by a single warehouse management system, which enables workers to track the pallets as they move throughout the facility. The stacker cranes manage 7090 pallets per hour. As orders come in, the pallets are taken from their positions and moved down to the consolidation area, where they are loaded onto trucks (5). About 500 pallets go out each day (6). 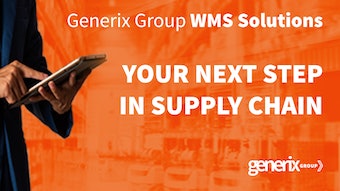