Opening The Door To Energy Savings 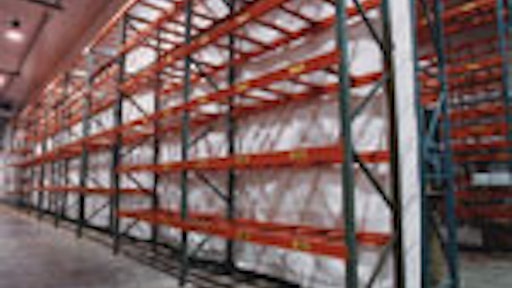 A common misconception about freezer doors at cold storage facilities is the need to compromise when it comes to refrigerated air temperature control, maximum productivity and low energy costs. The fact is, however, that significant strides in door technology over the years allow cold-storage facilities to have it all.

Rising energy costs-a pressing issue: The bottom line with refrigerated space is to keep cold inside the freezer and heat and humidity out. If not done effectively, energy costs can skyrocket. The old-school approach to achieve this goal is to install doors with high R-value. However, that doesn't always work best when considering the significant energy costs associated with air infiltration through open doors and poor door seals.

The age-old assumption is that a higher R-value equates to less energy costs due to reduced conduction (lost energy through the door panel itself). Although true, there is a point when increasing R-value provides rapidly diminishing returns, and the energy costs associated with conduction are often dwarfed by other factors. For high traffic door openings, energy losses due to infiltration can represent a significantly larger cost component than energy losses due to conduction.

Although R-value is not often a major factor in direct door energy costs, a minimum panel R-value is required to keep the warm-side door surface temperature above the freezing point so that frost and ice won't form on the panel. If the R-value is too low, a panel defrost system with heaters and blowers will be required, and the cost to operate such a system will likely be significant.

The reality is that doors are required to accomplish a lot and the stakes are high. The integrity of the food product is paramount-and proper temperature control is essential. Finding the right door that can help preserve food product integrity without high energy costs can present a conundrum given the challenges and tradeoffs associated with traditional door designs and the operating environments involved.

Traditional door options, methods: The traditional approach to this situation involves heavy, insulated, rigid doors with high R-value. These side-acting doors can be an acceptable solution for low traffic openings, yet they have limitations. Standard hard-core doors are typically slow-moving, which is results in longer door cycle times and higher rates of air infiltration.

As a result, a slow-operating door makes temperature control inside the freezer difficult and hampers productivity. Also, standard hard-core doors are easily damaged when struck by forklifts. A damaged door can result in significant energy losses due to poor sealing, unless the door is quickly repaired.

As an alternative to hard-core doors, high-speed roll-up doors and folding doors are often chosen. These doors move quickly and work to minimize air infiltration via a short open/close cycle time, however they can have poor sealing characteristics. Also, they typically have a very low R-value which is inadequate to prevent frost from forming on the door panel surface itself. To address this concern, it's not uncommon for defrost systems to be added to these doors at an operating cost of $7,000 to $10,000 or more per year.

Other methods and technologies to do the job include strip curtains and air systems, but these designs have their own challenges. Strip curtains, which are thought of as an inexpensive solution, consist of clear plastic strips suspended in the opening. Although the low upfront cost is appealing, they are poor sealing and the energy cost associated with infiltration makes it an expensive choice in almost any freezer application.

Also, their R-value is very low and frost buildup is common. Safety becomes a key issue as scratches in the plastic and frost buildup on the strips often obscure a forklift driver's vision, and the poor seal allows for frost and ice to build up on the floor.

Air systems can be either stand-alone or multiple-units integrated into a vestibule assembly. Often, these systems don't seal the opening well, and proper alignment of the air units is critical for best performance. Vestibules can also require a large footprint that takes up valuable floor space.

Air units typically include heaters to reduce the relative humidity of the infiltrating air, and often a tremendous amount of energy is required to operate them to the point where they keep the opening free of frost and ice.

The bottom line is that high energy cost is a recurring theme with traditional doors. Substantial air leakage at the opening makes it difficult to maintain proper freezer temperatures. In addition, frost and ice on the door can often cause significant issues unless an operationally expensive door panel defrost system is included. Overall, these high costs have driven the need for innovation.

Another advantage of technically advanced doors is their ability to withstand forklift impact, which minimizes maintenance and downtime while maintaining a tight seal over the life of the door. Some impactable doors also offer higher R-values to avoid the need for heated panel defrost systems. Automatic reversing capability on some models eliminates safety and maintenance concerns with doors that use pneumatic or electrical reversing edges for the same purpose.

Significant improvements in the upward-acting design category include reduced cycle times and the use of insulated door panels. These insulated curtain panels provide the necessary R-value to avoid expensive panel defrost systems.

At the same time, some doors can operate as fast as 100 inches per second to minimize air infiltration and ensure optimal productivity. As with bi-parting doors, newer upward-acting doors also incorporate a perimeter thermal air seal for added energy savings through a tighter seal.

No need to sacrifice: Door selection is no longer a matter of giving something to get something. Improved technology has led to more choices that result in low, long-term energy costs, improved efficiency and increased safety.

Randall Manufacturing's line of InsulWall products are flexible, insulated curtains that feature R-values ranging from three to 10. InsulWall can provide an ideal temperature zoning solution for both retrofit and new construction warehouse applications be-cause it works well for buildings with space limitations and little flexibility. Subdividing warehouse space with a new temperature zone is now easy. Insulwall can be used in applications including ambient to controlled, cooler-to-cooler and freezer-to-freezer. The ideal temperature differentiation is up to 20 degrees Fahrenheit. In addition, InsulWall maintains product integrity by separating products of conflicting scents and separating ethylene-sensitive produce from ion-sensitive produce. www.randallmfg.com.