Spot freight activity slowed during the Fourth of July holiday week as the number of loads posted on the DAT network of load boards declined 20% compared to the previous week. The number of truck posts fell 8.5%. 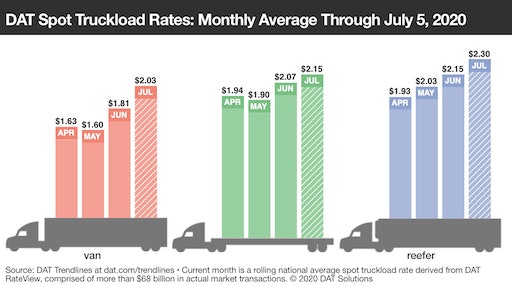 Spot freight activity slowed during the Fourth of July holiday week as the number of loads posted on the DAT network of load boards declined 20% compared to the previous week. The number of truck posts fell 8.5%.

Spot truckload rates continued on an upward trend, however, as shippers pushed freight out the door before the end of the quarter on June 30. National average rates ended the month of June well above pre-pandemic levels, even when you account for lower fuel costs.

Reopen for business: Freight markets that have been aggressive with their economic reopening schedules continue to show elevated levels of freight activity. Average van rates were higher on 84 of DAT’s top 100 lanes by volume and capacity was particularly tight in the Southeast, Southwest, and West Coast before the July 4 break. Pricing jumped in several key markets compared to the previous week:

Last week included more activity along the U.S.-Mexico border, with Geotab reporting a 2% increase in daily bidirectional trips across the border compared to pre-COVID-19 levels.

A sign that rates have peaked: DAT’s Ratecast predictive model expects July 5 to have been the peak for the national average dry van rate, which is expected to fall to around $1.73 a mile by the first week of August. Ratecast expects the peak date for the national reefer rate to be July 7 at $2.08 per mile, slipping to roughly $1.97 a mile in early August.

Produce shipments fall: The U.S. Dept. of Agriculture reported that seasonal truckloads of produce dropped 17% last week on fewer imports. Domestic shipments rose 2% week over week; that’s around 600 additional loads over the prior week. Produce volumes from Mexico typically tail off quickly this time of year and are now down 27% week over week.

Western reefer markets rise: On the West Coast, all produce markets reported tight capacity. May and June are peak months for California strawberries in the Watsonville-Salinas regions of the San Francisco market. Regional moves from there to Ontario, Los Angeles, and Fresno averaged $3.01, $3.05, and $4.04 per mile respectively.

In Texas, the Fort Worth and Lubbock were hot reefer markets for available trucks. The average rate on 58 origin-destination pairings increased from $1.90 to $2.09 per mile, with shorter, regional moves to Shreveport, La., and Little Rock, Ark., paying $3.23 and $2.94 respectively.

Coronavirus continues to create volatility in the marketplace. To get a better read on what to expect going forward, we’re keeping a close eye on New York state, which was hard hit initially and is now in the third phase of reopening.

New York is a case study for how freight markets might recover, since the state has a GDP that’s comparable to Canada and South Korea.

Phase one started in mid-May and included agriculture, construction, and manufacturing businesses, provided each region met certain health metrics. Testing ramped up and positive tests actually declined, so June was the first full month in which the state’s main manufacturing markets were open: Brooklyn, Buffalo, Rochester, Syracuse, Elmira, and Albany. Combined, those markets had a 26% increase in outbound van volume last month.

If the COVID numbers hold steady, New York as a freight market can shine a light on what the post-July 4 recovery can look like as other industries there come back on line.